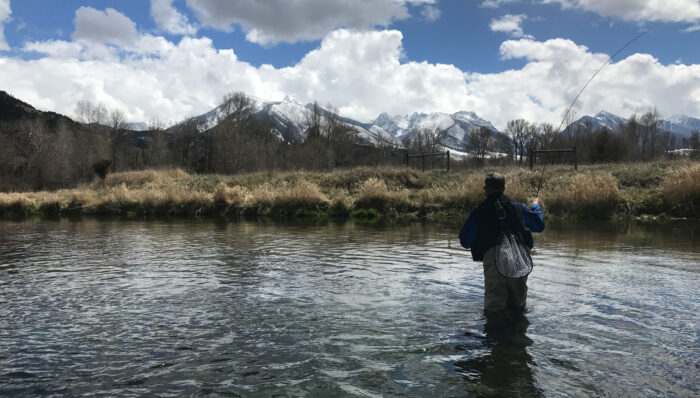 Whether you’re new to flyfishing or you’ve been at it for years, Montana Angling Co. broke down the month of April, including what to expect and some tips on tactics:

April is a favorite month for fly fishing in Montana for many long time Montana fly fishing guides and anglers. There is just something about April that bring anglers back to Montana year after year. Anglers can expect solitude on the water, quality fly fishing throughout the month, and a certain peace and calm on the water only found again in October. All of our Montana rivers, streams, and lakes are fishing well and spring hatches are consistent through the month.

Spring is in full swing by April in Montana. Anglers can count on strong hatches of midges and Blue Winged Olive mayflies (BWOs) on our rivers near Bozeman, MT and the Missouri River tailwater. Angling pressure is low which makes for solitude on the water and cooperative trout. Streamer fishing in April can be some of the best of the year and often produces some of the biggest trout of the year on the Yellowstone River, Madison River, and Missouri Rivers.

By the end of the month Skwala stoneflies and the Mothers Day Caddis hatch starts on the Madison River which adds to the already quality hatches and dry fly fishing opportunities. A lot can be said for April fly fishing in Montana, but needless to say anglers can count on quality spring fly fishing

Our Spring Special Guided Fly Fishing Trips run through April allowing anglers to take advantage of great early-season fly fishing at a great rate. Our Montana fly fishing guides consider this window to be the best time of year to experience our Montana rivers in solitude.

April offers anglers great pre-run spring fly fishing on our freestone rivers and consistently great fly fishing on the Missouri River tailwater. Weather can still be variable the first half of April, but anglers can count on generally favorable conditions by the 15th of the month. Spring in Montana means equal parts sun and snow, but temperatures that remain pleasant regardless.

Anglers can count on quality fly fishing on a daily basis in April. Mornings are often cool and there is no rush to the river as the best fly fishing is generally between noon and dusk. All of our area rivers are fishing well and generally fully accessible by the middle of the month. Float fishing and wade fishing are both great options.

Flows generally increase throughout the month as temperatures warm as our freestone rivers gradually move from pre-runoff in April to full run-off by mid-May. Occasionally warm than average temperatures result in an early run-off making for unfishable conditions on the larger rivers, but there is always great fishing to be found nearby.

Where to Fly Fish in April

While all of our Montana rivers are generally fishing great through the month of April, anglers will find the best fly fishing on the Missouri River, Paradise Valley Spring Creeks, Yellowstone River, Gallatin River, and Madison River. The rivers benefit from reliable hatches and low fishing pressure, making for what can be some of the most memorable days of the year.

Anglers primarily focused on float fishing will find the Missouri River, the Yellowstone River, and the Madison River to be the best fly fishing in April. Strong hatches of midges early in the month, followed by BWOs starting in the middle of the month, and some skwala stoneflies and caddis later in the month make for reliably good dry fly fishing throughout April. We have many fond memories of some truly incredible afternoons of dry fly fishing on these rivers with not another angler for miles in April.

Wade fishing anglers will find reliably good fishing on the Paradise Valley Spring Creeks and the Gallatin River in April. The wade-only stretches of the Madison River are also a great bet. Good hatches and predictable holding water mean the fly fishing is often more catching than fishing. Which is just fine by us.

Anglers can expect success with all fly fishing tactics in Montana by April. Water temperatures increase from their winter lows which makes for increased hatch activity and trout feeding. Spring midge and BWO hatches makes for reliably good dry fly opportunities. Nymphing is excellent. The streamer fishing remains steady through the end of the month, with the bite improving if flows rise on warmer years.

Dry fly fishing in April is usually not an all-day affair, but the afternoon session can often be as good as it gets, particularly on calm and overcast days. Daily hatches of midges and BWOs fluctuate, but will bring large numbers of fish to the surface when they do hatch in good numbers. The most consistent hatches will be found on the Missouri River and Paradise Valley Spring Creeks. The bugs are small, often #20-22, and the dry fly fishing can be technical, but the combination of challenging sight fishing and empty rivers makes for a rewarding day on the water.

Nymphing in April is about as reliable as reliable gets. On the Yellowstone River and Gallatin River, small stonefly nymphs (#8-12) paired with midges or BWO nymphs (#16-18) can make for non-stop action. On the Madison River anglers will find tandem rigs of worms and stoneflies paired with attractor nymphs such as copper johns, lightning bugs, and pheasant tails to be equally as effective. On the Missouri River, sowbugs and scuds dominate the April nymphing fare, with larger #10-14 being the most popular choices. This can be a fun time to experiment with flashy and brightly colored flies as well. Midges and BWOs reign supreme on the Paradise Valley Spring Creeks.

April is one of our two favorite months to streamer fish in Montana, with the other being October. Low angling pressure and a long hungry winter means the trout are generally more willing to chase down a large meal. Flashy and bright patterns fished well will produce. Often the early morning bite on cooler days in April make for only fair nymphing and slow dry fly fishing, great time to fish a streamer.