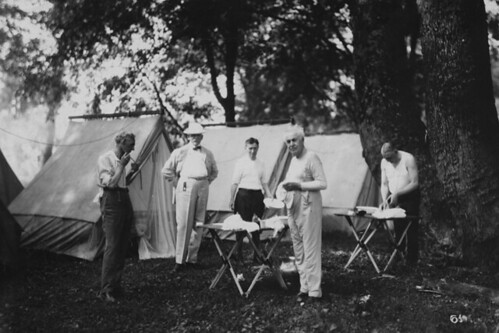 WHY GO CAMPING?
By Montana Grant

Back in the day, folks camped because they had to. Why abandon a perfectly good home so you can sleep outside. Outdoor camping meant sleeping in a Teepee, wagon, wall tent, tarp, rough shelter, or under the stars. No fancy Motorhomes or Rvs.

It wasn’t until the early 1900’s when Camping became cool again. 4 “Vagabonds” celebrated the outdoors together. These pioneers found camping to be pleasurable and fun.

The Vagabonds included Thomas Edison, John Borroughs, Henry Ford, and Harvey Firestone. These close friends spent 8 camping seasons outdoors. To help them they had 7 drivers and helpers. They drove in two Packards, two Model T’s, and two Ford Military style trucks. They hauled a lot of gear in their caravan.

Campsites included remote and beautiful places from New England, Pennsylvania and to the Carolinas. They wrote in their journals about how they “were in direct contact with nature.” They bragged about “enduring wet, cold, smoke, mosquitos, black flies, and sleepless nights just to touch naked reality once more.”

My favorite campsite was in Maryland aside Muddy Creek Falls, near the Youghiogheny River. Each camper had their own special tent, with their name on it. The dining tent was 20 feet square. A large camp table was in the center. On the table was a large Lazy Susan so that each camper could access their meals without getting up. Huge hemlock trees surrounded this famous campsite. If you visit the site, you can still smell the smoke and hear the whispers of their campfire stories. 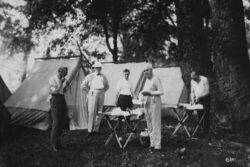 The meals were stocked with fresh caught fish and whatever the locals could offer. Newsmen and photographers visited often but needed to bring a fresh meal or bottles of booze. In 1921 the wives insisted on camping. Each brought their own chefs, chauffeurs, Butlers, and assistants. The simple campouts had become too crowded and complicated. That was the last Vagabond outing.

These Vagabonds often published stories about their Life and Work. The journals inspired others to try getting back to nature. In 1924, Henry Ford wrote that “the trips had been fun but were now too complicated and attracted too much attention.”

Camping is about roughing it. The simpler the better.

For more Montana Grant find him camping at www.montangrantfishing.com.