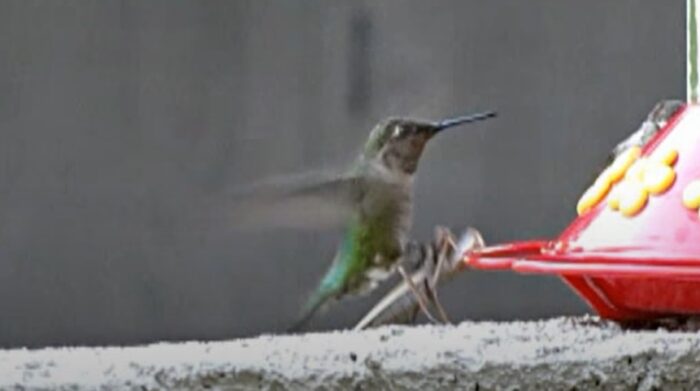 A few facts about Hummingbirds
By angelamontana

They’ve Got the Moves

No other birds can fly like hummingbirds. They can fly forward, backward, and even upside down! Hummingbirds are also the only vertebrae capable of hovering for a period of time during flight.

Along with being agile, hummingbirds have speed and stamina. They have been clocked at nearly 30 mph in direct flight and more than 45 mph during courtship dives.

They Are Anti-Social (and can be mean!)

Hummingbirds are, for the most part, unsocial creatures. They compete for food sources and often when more than one hummingbird is around, it ends up in a series of high-speed chases. Mating season can get a bit competitive as well, and male hummingbirds get mean. To prove their dominance, male hummingbirds will bob and weave and then use their needle-like beaks like knives and stab each other in the throat.  A violent way to get his mate.

A hummingbird’s brain makes up 4.2 percent of its weight; proportionally, that’s the largest of any bird’s. By comparison, our brains are two percent of our body weight. Studies have shown that hummingbirds can remember migration routes and every flower they’ve ever visited. They can also figure out how long to wait between visits so the flowers have time to generate more nectar. They can even recognize humans!

One thing that surprised me about hummingbirds is that they migrate. In fact, some travel over 2,000 miles twice a year. They winter in Central America or Mexico and migrate north to their breeding grounds in the U.S. during late winter and early spring. Hummingbirds will typically gain 25-40 percent of their body weight before they start migration in order to make their trip. They generally fly alone, often on the same path they’ve flown earlier in their life.

Hummingbirds fly by day when sources of nectar are the most abundant. They also fly low, which allows the birds to see, and stop at, food supplies along the way. Research indicates a hummingbird can travel as much as 23 miles in one day.

Interestingly, only female hummingbirds build nests and will lay only two eggs. The male hummingbird is not involved in raising young, and will often find another mate after the young are hatched. After hatching, baby hummingbirds will stay in the nest for approximately three weeks.

They Eat A lot

Hummingbirds have a very high metabolism and must eat all day long just to survive. They consume about half their body weight in bugs and nectar, feeding every 10-15 minutes and visiting 1,000-2,000 flowers throughout the day. In addition to nectar from flowers and feeders, these birds eat small insects, beetles, ants, aphids, gnats, mosquitoes, and wasp. So, hummingbirds are great to have in your backyard!

Also, did you know that a praying mantis is a threat to a hummingbird?

Yes, you read it correctly, praying mantis can kill hummingbirds. Even though hummingbirds are about eight times larger than the mantis’ usual meal, they will wait at feeders and launch a sneak attack using their rapid reflexes. So, if you find a praying mantis at your hummingbird feeder, gently remove it and place it at another location. Please don’t kill the praying mantis, they eat bugs and are beneficial to your backyard ecosystems.