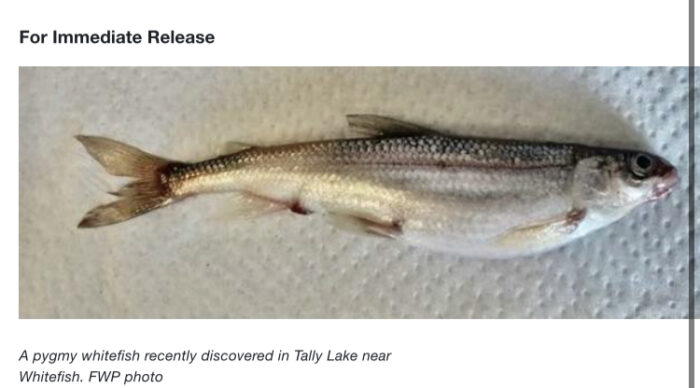 A surprising discovery in a pair of northwest Montana lakes, and the information is shedding light on the distribution of a rare native fish species.

Montana Fish, Wildlife & Parks biologists Sam Bourret and James Deraleau, as well as National Science Foundation intern Niall Clancy, have embarked on a research project to better understand the distribution of pygmy whitefish, a small salmonid that is designated as a Species of Concern in Montana. These unique fish are very different than their mountain whitefish and lake whitefish cousins because they live and spawn in deep lakes. They arrived when Glacial Lake Missoula was formed by glaciers approximately 10,000 to 20,000 years ago. When the big lake receded with the glaciers, these deeper lakes were left behind with the right conditions for pygmy whitefish to survive.

FWP biologists based out of Kalispell began surveying for these elusive fish in the past year as part of the agency’s regular management and monitoring efforts. Nets were placed deeper than normal to try and find pygmy whitefish, and two lakes have emerged successful so far: Tally Lake near Whitefish and Big Salmon Lake in the Bob Marshall Wilderness.

“It is exciting that we are still making scientific discoveries in the distribution of pygmy whitefish in northwest Montana,” Bourret said.

The discovery helps biologists gain new data for this age-old species that will help inform FWP about their distribution, impacts from predators, and habitat requirements. Since the distribution of the pygmy whitefish is associated with glacial refugia, and the fact that they are primarily found below 100 feet in cold water lakes, it is likely they are sensitive to warming temperatures.

Another important reason to learn more about pygmy whitefish is because of the role they play in the overall ecosystem’s food web. Although found in a limited number of waterbodies, pygmy whitefish can serve as an important food source for other fish, such as bull trout and lake trout, and even birds. A comprehensive food habits survey of fishes in Flathead Lake and the lower Flathead River in 1981 showed that pygmy whitefish accounted for at least 58% of the dietary biomass of bull trout during October and November.

“Pygmy whitefish are important to study because all aspects of the food web impact the whole native fish assembly,” Bourret said. “By understanding more about pygmy whitefish, we are better equipped to conserve and manage aquatic ecosystems when faced with impacts from climate change.”

Pygmy whitefish are known as “broadcast spawners” – meaning they generally spawn during mass spawning events in one or more consecutive months – in both the shallows and tributaries of lakes, but the specific physical characteristics of spawning sites are not well described. They migrate short distances. In late November and December, they move from Flathead Lake and congregate at the mouths of the Swan and Flathead rivers before they enter the river systems to spawn. They have been identified in Bull Lake, Horseshoe Lake, Little Bitterroot Lake, Ashley Lake, Whitefish Lake, Lake McDonald, Hungry Horse Reservoir, Lindbergh Lake, Holland Lake, Ross Creek, Flathead River, and Ashley Creek.

The state record pygmy whitefish – 9.84 inches long and .36 pounds in weight – was caught February 13, 2010 by Richard Geldrich in Little Bitterroot Lake near Marion.