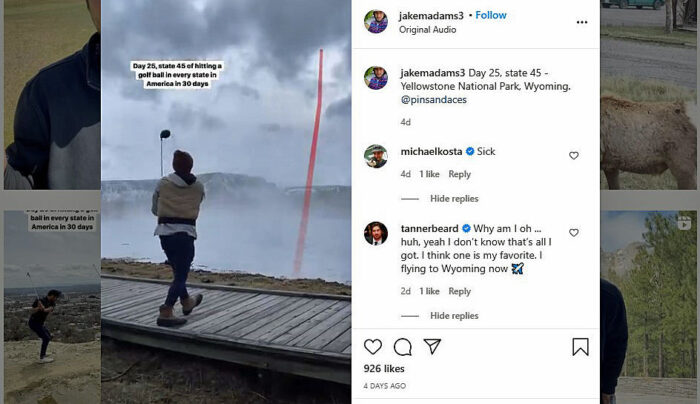 Brett French reports: Golfer apologizes for teeing off in national parks
By angelamontana

Comedian Jake Adams had a great idea for gaining attention and seeing some new country. He would hit a golf ball in 50 states in 30 days. While racking up the road miles, Adams made stops in several national parks along the way. While there, he teed up and hit a few shots. He then posted videos of them to his Instagram account. News that he was hitting golf shots in parks drew attention, but not the kind he wanted. The National Park Service is investigating the incidents for possible charges. At the end of his tour, realizing his mistake, Adams posted an apology on Instagram and removed the video of his park strokes. To read more about his poor golf shot choices, check out my story at https://billingsgazette.com/lifestyles/recreation/instagram-golfer-apologizes-for-teeing-off-in-national-parks/article_08adac0e-e285-5e69-b467-7e0e6c4f9228.html