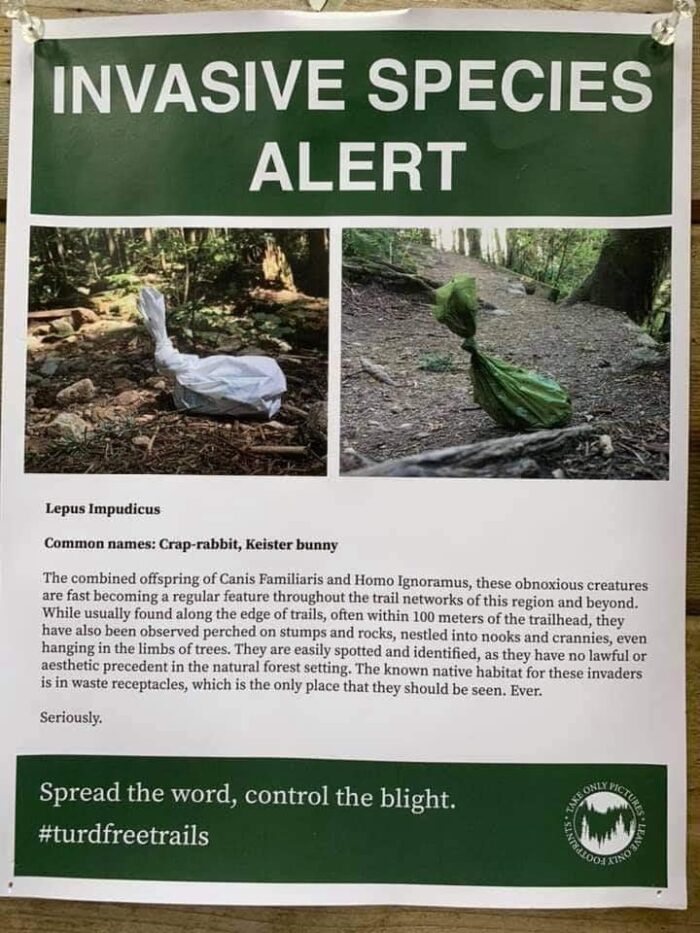 Our trailheads, boating and fishing access areas and trails have become overpopulated with Crap Rabbits! Apparently, pet owners and hikers are responsible enough to bag their pets, children’s diapers, or personal, waste, but not carry it out. Instead, they hang it on branches, or lay it along the trails.

No one cares to see poop on parade! Although I do remember watching giant turds marching in a Bozeman Parade. These 8 footers were promoting a portable potty company. Ironically, they followed a horse herd that filled the road with horse apples! I digress and that is a story for another time.

Apparently, onlookers have seen these fat Crap bags, with twin ear like handles and hence the name. I don’t get it. Why would people go to the trouble of cleaning up after their messes and not finish the job? At least toss it into a waste bin. Every public parking and access have one. Some are even bear proof. 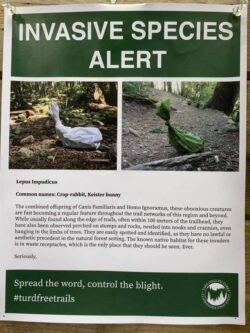 You could at least bury it under a log or some rocks, like a Cat Hole. It only takes a few minutes. Sadly, many pets get free roam of our open spaces and leave their messes at will. I remember an area in a Maryland Park, where city folks walked their dogs. Robt. E Lee Park, along the Jones Falls, had a huge dam that created Lake Roland. The lake was full of fish but had a consumption ban on it. The issue was huge amounts of pet waste that contaminated the water, soil, and entire park. Some folks cleaned up the mess, some did not, and some stocked the area with Crap Rabbits.

The soil in the main dog walk area was so contaminated, it was declared off limits to everyone. They excavated tons of contaminated topsoil to try and save this Super Fund Crap Site!  Once the damage was repaired the problem returned despite dump stations, free bags, routine cleanups, and enforcement.

Hyalite Lake is one of Southwest Montana’s pristine, wilderness destinations. It is now closer to a developing Bozeman suburb. Pet walkers have discovered their new Dog Park and have marked their territory with Crap Rabbits. Public School Trust lands and close to town BLM’s are also being assaulted. In the Winter, the trails become impassable with fecal land mines.

This is not the fault of the pets and infants. It is the fault of their parents and owners. As long as the waste is not in their back yards! It would be nice to be able to identify these Crap Rabbit stockers, and stock a truckload or two, in their personal space.

We all have the shared responsibility to keep our open spaces inviting. Crap Rabbits do not do this. Not only are these bagged critters smelly, and ugly, they are unhealthy.

Leave the open spaces turd free and better than you found it.