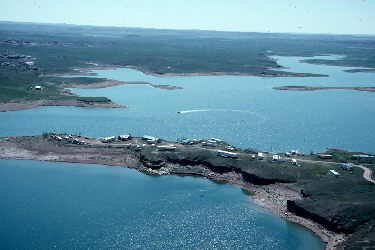 Fort Peck Reservoir water levels are down…what does this mean for the fishery?
By angelamontana

FORT PECK – Anglers and boaters recreating on Fort Peck Reservoir this year have noticed that water levels are lower than they have been the last several years. More shoreline is exposed, boat ramps are longer (all ramps are currently usable), and islands and shallow points are “popping up” where they haven’t been seen for years. Besides making boating on the reservoir a little more challenging, how do these lower water levels affect the fishery of Fort Peck?

Changing water levels are nothing new to Fort Peck. Since Fort Peck Dam was constructed in 1937, water levels have fluctuated annually. In drought years like in the late 1980s and mid-2000s, levels were very low for several years. As of June 21, 2021, the water level is at 2,233 ft above sea level, which is about 17 ft below the full pool of 2250 ft and six feet lower than on this date in 2020.

Montana Fish, Wildlife & Parks fisheries sampling has shown that declining reservoir elevations beginning in the late 1990s and persisting into the early 2000s led to reduced habitat and shoreline forage fish production. This loss of habitat led to poor survival and growth of walleyes and other game fish species.

Decreasing reservoir levels influence walleye, pike, and other game fish primarily through the food chain. If shoreline prey fish like yellow perch, crappie, and shiner species are in low abundance, top predators will compete and consume these forage species and then move on, looking for other forage.

“In the current case on Fort Peck, that could mean that walleye and other game fish will head to deeper water in search of cisco,” said Heath Headley, FWP Fort Peck Reservoir biologist. “As we get into the summer angling season, anglers may need to adjust their tactics accordingly.”

The 2020-2021 winter and spring provided less snowpack and runoff, resulting in lower water levels than the last several years. Additionally, current high elevation snowpack estimates for headwater drainages are extremely low, resulting in runoff projections that could drop Fort Peck another 1.5 to 5 ft.

Is there a potential silver lining to the declining water levels? Maybe, according to Headley.

“If the reservoir levels are held lower for several consecutive years, new vegetation will start to grow around the shoreline again,” adds Headley. “When water levels improve and these areas are flooded, this not only provides temporary habitat for forage species, but nutrients from these plants will break down and enter the water starting a positive food chain production.”

In 2007, just 14 years ago, Fort Peck reached its lowest level at 2,196 ft…54 ft below full pool and 37 ft lower than the reservoir’s current level. Since 2008, the upper Missouri River drainage above Fort Peck, including the prairie watershed, has generally seen good snowpack and runoff into the reservoir. After the big snowfall winter and wet spring of 2010-11, the reservoir reached full pool. In that huge water year, the reservoir picked up an additional 30,000 surface acres…roughly the size of Canyon Ferry Reservoir!

“The increasing reservoir elevations, beginning in 2008 and continuing past 2011, are one of the main reasons the walleye fishery is very healthy today,” continues Headley.

As we get into the boating season, anglers and water recreationists are encouraged to be on the lookout for new sunken islands and shallow bays. Be safe, have fun, and go catch some fish!