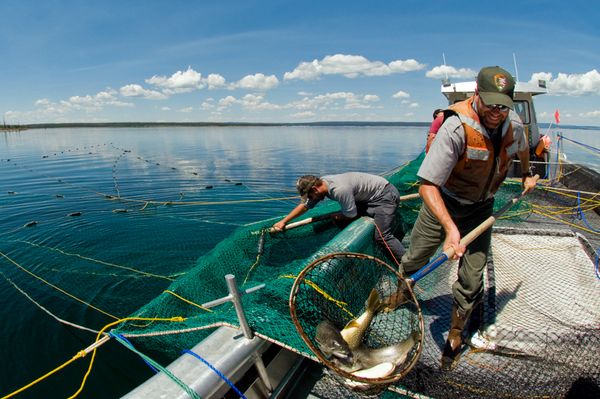 The Yellowstone Lake has been invaded by Lake Trout. Millions of dollars have been spent to eradicate these predatory fish from the native cutthroat trout waters. Larger Cutthroats are returning in greater numbers each year. 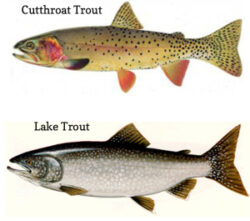 Thanks to decades of eradication and netting, the Lake Trout population has been reduced by 80%. Some lake trout were over 50 pounds. Since they live in deeper waters, eagles, pelicans, and natural predators can’t get to the Lakers. Neither can most fishermen.

As good as this sounds, Native Cutties are facing new challenges. Park Biologists have discovered a non-native Cisco minnow in the lake. These minnows are targeted by Lake Trout and were probably introduced by Lake Trout fishermen. Live minnows are not legal to use in the park, and most of Western Montana, but… This species of Cisco is not native to any waters west of Minnesota. They were also introduced into Fort Peck Reservoir.

Microplastics have also been found in the stomach of fish in Yellowstone Lake. The potential impact is not yet known but this may also affect the lakes crustaceans and all fish. Study is ongoing.

Genetically Pure West Slope Cutthroat, Grayling, and Yellowstone Cutthroat strains have also been stocked in the watersheds of Yellowstone Lake and other areas in the park. Biologists hope to preserve the wild, Native fish populations and habitats.

Non-Native fish threaten the genetically pure Native fish. Some trout species can spawn together, and hybridization can occur. Yellowstone Park is a symbol of the Natural Beauty of Nature.

We are not back to the amazing Glory Days of the Yellowstone Cutthroat filling the river days but, it could be soon.

Cutthroats are on a comeback!