Netting a great catch is a great memory. It is even better when you share the moment with a friend. There are several reasons why you should allow a friend to net your fish.

Odds of landing the fish increase

Quality of care for Catch and Release is increased

Sharing the story makes it better

Mentoring and instruction is improved 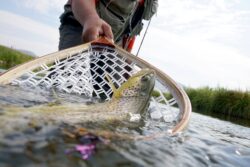 Netting can make you a Hero or a Zero. As a Guide, it is important to make every netting proper and finished completely.

Years ago, I was in Canada with a friend that was limited in his fishing and netting skills. We had caught pike, walleye, and perch and I had him practice and learn these skills during the trip. My hopes were that at some point, I may need help landing a BIG fish that would take teamwork.

Sure enough, I was jigging perch with an ultralight rod/ 4 lb. test line and hooked a monster Northern Pike. This fish was over 50 inches and I tagged him on the tip of his nose. After a great battle, the massive fish was coming to the boat. There was no way That I was going to handle the fish alone. We had no gaff or harpoon. Our long-handled net was the only option. Jeff stepped up to the plate and expertly netted the pike, which barely fit. As he tried to bring the pike into the boat, the net broke at the connection to the handle!  OH CRAP! Ne

At least we netted a great story!