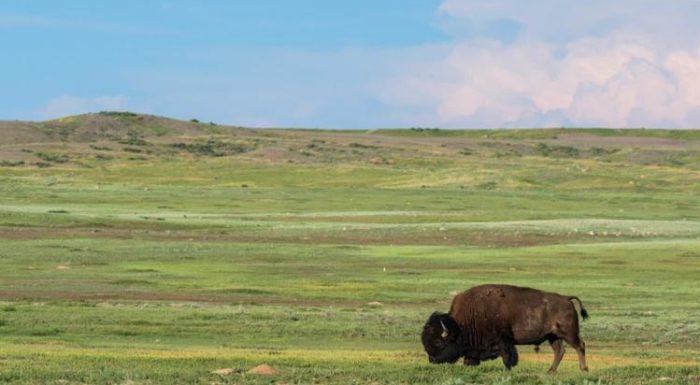 From the Bureau of Land Management

LEWISTOWN, Mont. — The Bureau of Land Management (BLM) invites the public to comment on its Draft Environmental Assessment (EA) and Finding of No Significant Impact (FONSI) for a bison grazing proposal on BLM-administered lands located in Phillips County, Montana.

BACKGROUND: On Sept. 24, 2019, the American Prairie Reserve (APR) submitted a proposal (an update to their earlier proposal submitted on Nov. 20, 2017) to modify certain terms and conditions of seven BLM-administered grazing permits held by the APR. American Prairie Reserve’s original proposal, sought permit changes for 18 BLM grazing allotments located in four counties. BLM conducted public scoping April 9 through June 11, 2018, including public meetings held in those four counties. The BLM received 2,497 submissions which were reviewed and considered in determining the final set of issues to be included in the NEPA analysis. Documents associated with the EA’s completed public scoping period are available on the BLM’s ePlanning website https://eplanning.blm.gov/eplanning-ui/project/103543/510. The APR’s updated proposal significantly reduced the number of BLM allotments involved and requested a more conventional grazing regime, including pasture rotation in alignment with current range management practices.

APR requested from BLM a change in class of livestock for cattle and/or indigenous animals (bison), changes to the authorized seasons-of-use, construction, reconstruction and/or removal of some fences and adjustments to allotments (such as combining pastures).

A virtual public meeting is planned for Wednesday, July 21, 1-4 p.m., via Zoom to provide the public an opportunity to comment about the Draft EA and FONSI. Pre-registration is required. See the e-Planning project website for more details.

“Even if people can’t attend the virtual meeting, we still hope they’ll visit the ePlanning website to read the Draft EA and FONSI, and provide thoughtful, substantive comments,” said BLM Malta Field Manager Tom Darrington. “All comments received will be reviewed and considered by our interdisciplinary team.”

“Public input is an important and valued part of the Environmental Assessment process,” BLM North Central Montana District Manager Mark Albers added. “We know everyone has busy lives, and we’re grateful to everyone who makes the time to get involved and contribute substantive comments addressing BLM’s proposed actions. That input is essential to helping us make decisions that are good for the land and the people, while complying with BLM policies.”

Public comments submitted may be subject to Freedom of Information Act requests. Please, do not include in your Draft EA/FOSI comments personally identifiable information you do not want to be made public.