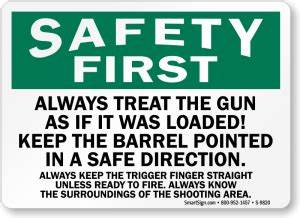 It takes 3 things to happen for a gun accident to occur. First, the person with the gun lacks training or knowledge. Second, drugs, alcohol, immaturity, or stupidity are involved. Third, the gun is pointed/aimed in a lethal location when the trigger is pulled.

The recent shooting accident on a movie set, by Alec Baldwin, confirms this sequence. The actor/producer used a prop pistol to aim at and kill the movie set director and the film director with one shot.

This is not the first time an actor or staff person has been injured with gunfire on a movie set. Brandon Lee was killed while making the movie “The Crew, in 1993. Actor John-Eric Hexum was shot in 1984 by a blank at close range. Other accidents have occurred while filming movies by untrained, inexperienced, and unprepared gun handlers. Actor Liam Neilson makes a living being a “Marksman” and gun advocate, when in fact in supports banning guns.

Normally, an expert gun master is on the movie set. Most experienced hunters could do this job. These experts are called “armorers”. You would think that they are knowledgeable and trained. The “Armorer” on this movie set was the daughter of a real Armorer, that was not comfortable or experienced, but cheaper, than her Dad.

Keep in mind that a blank gun can not hold or fire a live bullet. The pressure created by a blank gun can kill or injure when the weapon is discharged against a vital area or the head. This has been the case with a few actors pretending to shoot themselves. They were surprised when the blank gun discharge fractured their skulls and sent fragments of skull into their brains, killing them.

The only way Alec Baldwin could have shot his crew was by using a real gun with a real bullet. Prop guns are simply plastic replicas that can’t be shot. Muzzle blasts are added by computers after the filming. So why was a real gun, with a areal bullet, allowed to be in the actors hands? Was it the armorers fault? Did Alec or someone else deliberately load a real pistol? If you plan to shoot directly into the camera or at the Directors, use a plastic prop gun and add some digital flash later.

The third step is always the most important. All of us hunters and sportsmen were taught gun safety. My Dad bought me my first BB gun. It was a Daisy Winchester 30-30 look alike with a lever action. I loved that rifle. My first deer rifle was the real 30 -30 caliber deal. He taught me all he could about shooting and gun safety. His final comment was, if you ever point the weapon at anything inappropriate, sweep the barrel by other people, or display unsafe use, he will wrap it around a tree.

Guns are not toys!