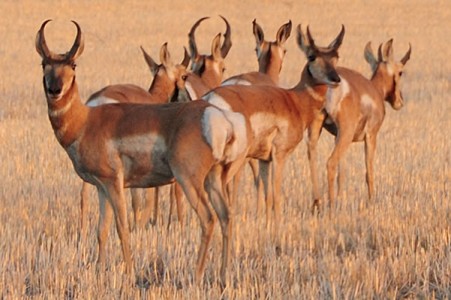 Number of antelope hunters, harvest down from 2019
By angelamontana

BILLINGS – The number of antelope hunters who stopped at Montana Fish, Wildlife & Parks’ south central Montana check stations over the weekend and the number of checked animals both were down from 2019 and well below the historic average.

FWP wildlife biologists operated check stations at Big Timber, Broadview and Billings during both Saturday and Sunday of the opening weekend of the general antelope hunting season. They did not operate in 2020 because of COVID-19.

Weather conditions this year generally were conducive to antelope hunting, with a light rain part of Saturday and clear skies with a breeze on Sunday.

The hunter and harvest numbers likely resulted from fewer antelope on the landscape than earlier years – thanks to poor fawn numbers.

At the Broadview check station, FWP wildlife biologist Ashley Taylor counted 194 hunters over the weekend, down from 200 in 2019, the last year that the station was open. The hunters checked 50 antelope, down from 67 two years ago. Taylor noted that younger antelope were lacking in the harvest, likely as a result of fewer fawns being born and surviving during the past few years. Horn grown also was stunted compared to recent years.

Though the dry, warm summer reduced upland game bird cover in many areas of south central Montana, most of the 21 bird hunters who stopped at the check station had a couple of harvested birds, Taylor said.

At the Big Timber check station, FWP wildlife biologists Justin Paugh and Shawn Stewart checked 175 hunters over the weekend, down from 300 two years ago. Those hunters had harvested 102 antelope, down from 162 in 2019 and the fewest since 2008. They also noticed reduced horn growth in older bucks and fewer young antelope than normal.

Paugh believes that lower hunter numbers and antelope harvest likely were due to reductions in the available antelope licenses this year north of Big Timber, and in central and eastern Montana. While 32 of the people checked were hunting birds and most had a couple of birds, they reported reduced bird cover in many areas.

Over the weekend, 131 hunters stopped at the Billings Heights check station, down from 162 in 2019. They checked 59 antelope compared to 83 last year. FWP wildlife biologist Megan O’Reilly said the checked harvest was predominantly animals at least four years old, likely because of multiple recent years of poor fawn recruitment.

Twenty four bird hunters were among those who stopped at the Billings Height check station. They had a mix of waterfowl, pheasants and one sandhill crane. Many of those hunters reported low numbers of pheasants in the field.