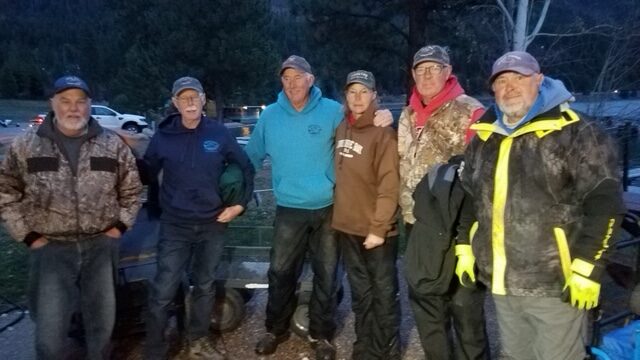 These annual Mack Days Fishing Events are sponsored by the Confederated Salish and Kootenai Tribes. There was Up to $200,000 in Cash and Prizes that the anglers were competing for. The last weekend of the event was plagued by cold, wind, rough water, and rain.  The total for the last weekend was 878 with Friday’s count of 342, Saturday counts of 400, and Sunday’s count of 136 lake trout entries.

Laurie Kreis was the winner of the Ladies with 352 lake trout entries, 2nd place was Kim Mack of Helena with 102 entries, 3rd place was Gina Schiff of Whitefish with 76 entries, 4th place was Nicole Peters of Missoula with 55 entries, and 5th place was Debby Sacchi of Thompson Falls with 51 entries.

John Gauci of Florence won the 70 and Over Category with 524 lake trout entries and Paul Grove of Wyoming, IL was 2nd with 101 entries. Winning the two drawings in the category were Larry Ashwell and Bernie Olsen.

There was a tie in the 13-17 Category with 9 lake trout entries each 1st and 2nd Alison Putzler of Kalispell and Blake Williams of Big Arm, and Ashlin Peters of Polson is third with two entries.  Wyatt Best of Florence won the 12 & Under with five entries and second is Brynn Blowers of Missoula with three.

Mark McMillin of Missoula won the Spirit of the Event Award.

A Big thank you to the Confederated Salish and Kootenai Tribes who sponsor these events to help the native trout species in Flathead Lake.  The lake trout anglers in these events are an awesome group of men, ladies, and a few young up and coming anglers. They make the events successful!

See you in March for the 2022 Spring Mack Days Event!