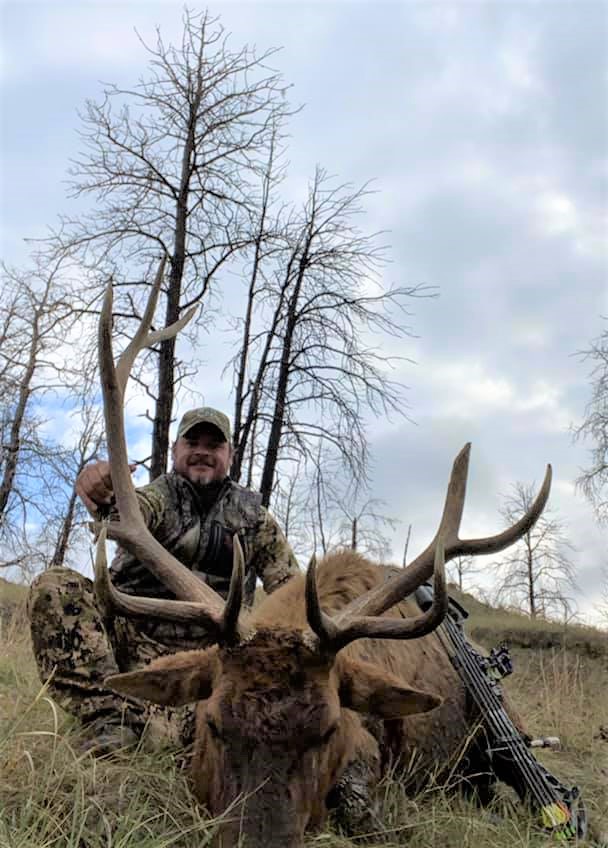 Bow hunting for elk is damned hard! You need to be physically and mentally tough. Patience and persistence is required. I am not talking about elk hunters on the family farm, shooting from the truck, hauling the elk with a tractor, or on private protected land. Those are different kinds of hunts.

Kiley Jons of Bozeman is a real hunter. He hunts public land, uses a bow, hunts hard, and puts in his time. He and his friends hunt hard and then hunt harder. They all have mastered the skills and mindset to tag out almost every year.

This year was especially tough. The Young Buck hunters, like Kiley, have grown up, got married, and have small children. Families mean less time afield. Kiley managed 17 days afield. Many days he hunted alone since he had to hunt when he could and not when his buddies could.

With 2 days left in the Bow season, Kiley was on the clock. He was seeing plenty of elk but getting close is another challenge. He had seen a broken antler bull fighting with other bulls, earlier in the season. He also saw smaller bulls but was looking for a bigger one.

Finally, he heard a bugling bull about 2 miles away. Kiley was on the hunt. After getting close, he could see the broken antler bull with a herd of cows. He was in the open and they were moving to bed for the day. Knowing the lay of the land, Kiley got as close as he could but…

Elk have great vision, smell, and smarts. Only if everything is in his favor could he get a shot. The elk were nearly 200 yards away as Kiley went flat and began to belly crawl closer. The terrain was slightly sloped, allowing him to not be seen.

After 100 yards or so, Kiley raised up and immediately was staring into the eyes of a cow. She saw him but did not spook. The bull was further away so the belly crawl continued. When Kiley raised up this time, the cow was up and alongside the Bull. He quickly ranged his shot and took aim with his bow. 52 yards was the shot. He released and watched the arrow arc towards his target. 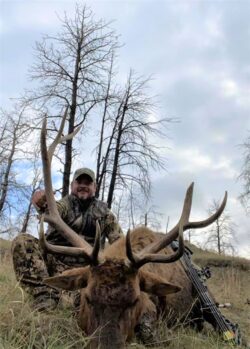 The cows in the area all began to move and Kiley lost sight of the arrow. He used his binoculars to search for the bull. The Broken Bull was stumbling and fell. Success!

The Jon’s family will again have a full freezer for the winter. Kiley continues the hunting heritage that he loves.