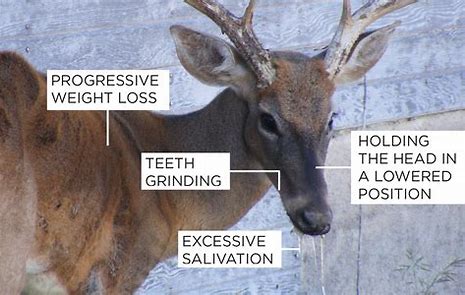 Chronic Wasting Disease in Montana is not going away. This year’s positive testing from hunter’s samples, will be about the same as last years tests. Over 1,000 additional tests were processed this hunting season. CWD impact seems to be holding steady, according to FWP officials.

When you examine the areas where CWD has entered Montana, there is a connection to Game Farms. It seems like the original infections were hosted by diseased penned deer that escaped. Canada and Wyoming are evidence of this. 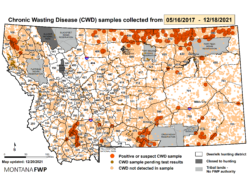 So far, there has been little data to support any CWD transmission to humans. Most agencies to not recommend that humans eat CWD infected meat. Many Soup Kitchens and Food Pantry’s have also stopped accepting donated deer.

All deer species are in the circle of infection. In Montana. Whitetail deer, Mule deer, Moose, and elk have been infected. Not all deer species have the disease. CWD is fatal but takes a few years to its damage.

New research is showing a possible health risk to humans. The Canadian Food Inspection Agency has been using primates to test consumption/ infection issues.18 Macaque monkeys were used in the research. These monkeys are the closest primates related to humans approved for research. Monkeys were fed CWD infected deer meat over 3 years. They became infected. More research is needed.

Because of the enormous potential for future health concerns, a personal test is being created. The Sustainable Agriculture and Wildlife Corporation is creating a blood test to test for CWD, that Hunters can use for deer and elk. This patented test is awaiting USDA approval for use in deer farming, and public lands. The kit costs around $10 and to get the results you need to pay another $40. The idea is that all hunters would take a blood sample from their harvested deer or elk and send it to the lab in North Dakota. Test results would take 7-10 days.

Currently the USDA is not approving this new technology. They do not have the test needed to measure and evaluate this prion blood test yet.