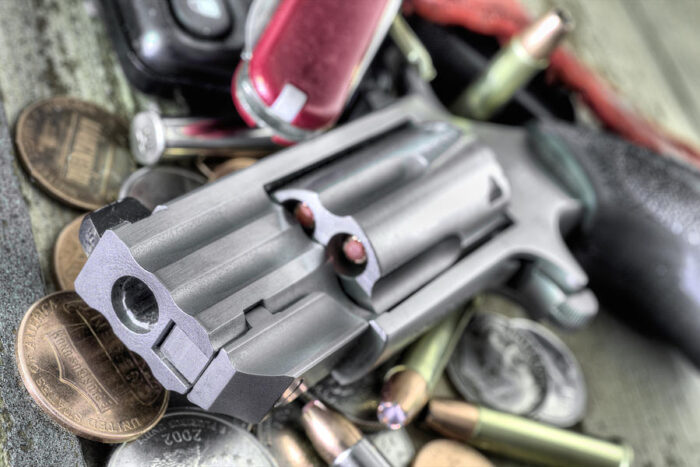 When was the last time that you found some coins? It used to be that everyone’s truck cup holders or dashboard trays was full of old quarters, nickels, dimes, and pennies. I was surprised to see the Salvation Army bell ringers still asking for coins.

Walking across a parking lot used to be good pickens. Folks seemed to lose coins as they exited or entered their rides. Areas around drive-up fast-food spots also was a good spot to check. Sofas, chairs, and furniture was home to coins after they fell out of pockets.

I often found coins at the gun range. Shooters would drop them after adjusting their scopes. Coins in your pockets may also scratch your conceal pocket carry derringer.

They used to say that people walked over $120 in coins every day. The hidden money probably was under the dirt, gravel, or leaves. That number has probably gone down. Occasionally we may have gotten lucky. Coins used to show up in the washing machine or dryer but not lately.

Metal Detector guys still find plenty of coins along with bottle caps, zip tops, and nails. On occasion they may find other “Top Pocket” valuable “Bobby Dazzlers”, to coin a phrase.

There’s a restaurant in Ennis Montana that has pennies stuck into the chink between the logs. Some are Wheat pennies and others are memorial style. People try to dig some out but there are thousands

My Piggy Bank, which is a ceramic pig, had $35 of coins that I wrapped into coin wrappers. I will turn them in next time I cash a check. 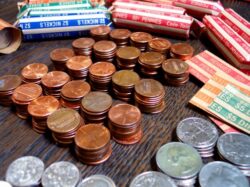 Coins used to have value. My Uncle always gave me a silver dollar when he visited. I had a huge sock full that my parents made me put into a savings account. I wish I still had those dollars.

Coin collecting was a big deal when we were kids. WE had coin books that we pressed the coins into. I am sure that today they are worth at least what they are worth.

Once in a while you find a foreign coin. Canadian coins are almost the same size as American ones. AS a kid I remember going to Luray Caverns in Virginia and throwing coins into the Wishing Well Pool. It was thick with all kinds of coins.

Dimes fit well into a 12-gauge shotgun bore. You could do some real damage with a stack of dimes shot. 10 dimes would get you a Buck!

Coins don’t seem to be as important today. If you do get change, the cashier will ask you to donate it to the local animal shelter or some other cause.

When I do gather up some coins, I turn them into some fishing gear, lures, or maybe some hunting stuff.

A Penny for your thoughts?