BANNED FROM FISHING FOR LIFE!!!
By Montana Grant

A recent Judge in Vancouver found a Commercial Fisherman guilty of several fishery violations. Scott Steer had a rap sheet as long as lunker pike. These were not his first violations.

His sentence is a Lifetime Fishing Ban! This harsh outcome was certainly deserved. True Sportsmen have little sympathy for a poacher and violator of environmental laws. Not only can’t he fish, he also has lost the privilege of buying or selling fish sales for 5 years.

Steer was caught crabbing out of season, in a closed area, without a license. On May 14th, 2021, he tried to evade officers as they chased him through Vancouver Harbor. When they finally hooked him up, they found that he had netted 250 live crabs, which were photographed and then released. 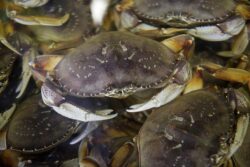 He has been in jail since, which also counted toward his punishment. Steer is also required to perform 75 hours of community service. Obviously, he is steamed about the outcome. He also had to forfeit his boat, gear, equipment, and future in the seafood industry.

The court had previously assigned a Court Order, along with fines for years of violations. Steer never gave them a second thought and continued to snag whatever he could illegally. I guess he finally caught his Limit!

“If you do the crime, you need to do the time!” To some, these penalties may seem harsh. Had Steer shoplifted, vandalized, assaulted, stole, or committed any number of other crimes, he may have gotten free bail, no jail time, no court dates, and have been able to sue the officers that chased him.

Sportsmen are glad that this loser and thief was not a Catch and Release.