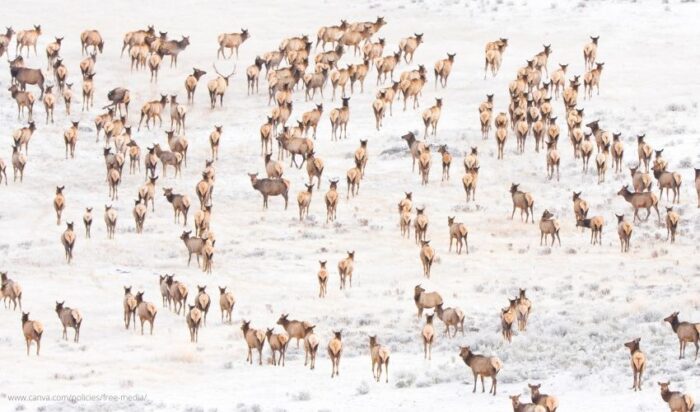 Capture operations took place in northern and southern areas of the Tobacco Roots. In the northern portion, which is south of Interstate 90 from Whitehall to Three Forks, 100 cow elk were captured with the aid of a helicopter. Forty of those elk were outfitted with radio collars, which will be active for one year and help wildlife managers better understand their seasonal ranges, migration routes and potential mixing with other elk herds.

FWP staff helped capture 63 elk in the southern portion, which is north of Montana Highway 287 from Twin Bridges to the Virginia City hill. FWP staff did not deploy radio collars in the southern portion because elk were captured here in 2014, and movement data was collected from 26 animals at that time. While 49 elk tested negative for brucellosis in 2014, this herd was sampled for brucellosis testing again because two cow elk in the Ruby Mountains nearby to the south tested positive for brucellosis in 2020. Collar movement data in this area showed potential for herd mixing.

The goal of these operations is to evaluate the presence and understand the movement of brucellosis in Montana’s elk populations. The research will also help wildlife managers understand the overlap between elk and livestock on the landscape.

The Montana Department of Livestock (DOL) administers a brucellosis surveillance program for livestock in an area of southwest Montana called the Designated Surveillance Area (DSA). Requirements within the DSA are intended to protect the state and national livestock industry from the spread of the disease.

Livestock within the DSA run the risk of exposure to brucellosis from infected wildlife and therefore are subject to additional brucellosis testing requirements for movement and change of ownership, as well as traceability requirements. Live elk captures there are intended to determine if the DSA boundary should be adjusted to include livestock in the area. The Tobacco Root Mountains are outside of the DSA.

Brucellosis is a bacterial disease that can infect humans, cattle, bison and elk and can result in abortion or the birth of weak calves. The disease is primarily transmitted through contact with infected birth tissues and fluids.

Animals that test positive for brucellosis exposure do not necessarily carry or spread the disease but were previously exposed to the bacteria and have developed antibodies that can be measured with blood tests.

This project is a joint effort between the DOL and FWP, with support from the Rocky Mountain Elk Foundation. In addition, this project and capture operation would not be possible without the generous support and permission from landowners to capture elk on their property.

“The Department of Livestock appreciates the partnership with FWP and the information and knowledge gained through this collaboration,” said Dr. Eric Liska, the DOL’s brucellosis program veterinarian.

More information about brucellosis and the Targeted Elk Brucellosis Surveillance project can be found online at fwp.mt.gov/conservation/wildlife-management/elk.