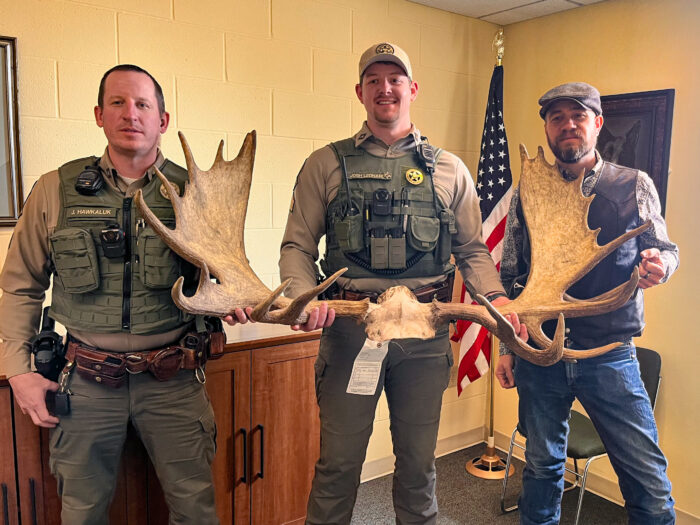 TOWNSEND – A Helena man received a lifetime ban from hunting and trapping in Montana as part of his sentence for illegally killing a trophy moose east of Townsend in 2019.

Shiloh Berry, 41, was sentenced Friday in Broadwater County District Court after pleading guilty last fall to unlawful possession of a game animal, hunting without a valid license and waste of a game animal.

In addition to the lifetime ban from hunting and trapping, Berry’s sentence includes a three-year suspension of fishing privileges, $12,100 in fines and restitution, and a suspended five-year imprisonment term.

In November 2019, game wardens with Montana Fish, Wildlife & Parks received a tip via the department’s 1-800-TIP-MONT hotline about a dead moose with its head cut off and the meat abandoned. Wardens responded and found the carcass on Blacktail Road, about 17 miles east of Townsend. Wardens also found distinctive tire tracks and boot prints at the scene.

In April 2020, wardens received another tip that Berry possessed moose antlers he claimed to have found in the same area where the moose carcass was discovered. Wardens executed a search warrant and discovered the antlers, as well as boots and tires that matched the tracks at the kill site. During an interview with wardens, Berry confessed to killing the moose.

The moose’s antlers were 56 inches wide and had a Boone and Crockett gross score of 167 and a net score of 145.

Montana game wardens rely on tips from people who observe crimes against wildlife. FWP’s 24-hour hotline for reporting these crimes is 1-800-TIP-MONT. Callers could be eligible for a cash reward of up to $1,000.