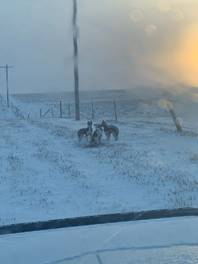 Belt, Mont. – Feb. 22, 2022 – NorthWestern Energy Belt Town Manager Cody Yurek thought the mound under the power line he was patrolling early Tuesday morning in -15 below, snowy weather was an animal carcass, until it started wiggling.

“It turned out to be three shivering puppies, you could see the ground was thawed out where they had slept,” Yurek said.

The husky-mix pups were healthy, but lost in the middle of nowhere. Yurek was conducting an annual maintenance patrol of the remote line.

“I couldn’t just leave the little buggers,” he said.

After some coaxing, he got the puppies into his warm vehicle and headed back to town.

“I got them some dog food and water and then called the Chief of the Belt Rural Volunteer Fire Department Travis Johnson to ask for help finding their home,” Yurek said.

“We have a great relationship with Cody and with NorthWestern Energy in general, so I always take his calls,” Johnson said.

This time rather than a report of a vehicle wreck discovered during a line patrol or an alert about a downed power line, Yurek had good news to share.

The puppies continued to warm up in an office at the fire hall. With the help of social media, they were reunited with their owner within an hour.

“The owner said she’d let the puppies out Monday night with an adult dog who returned without them,” Johnson said. “She was pretty darn happy to see them.”

Yurek has been the Belt town manager since 2010, overseeing a large area that includes the Monarch and Neihart areas. The fire department often enlists his help to guide them to remote areas for backcountry rescues and other emergencies.