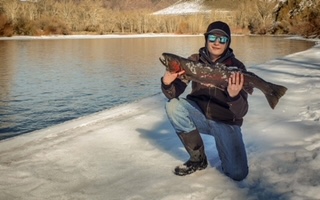 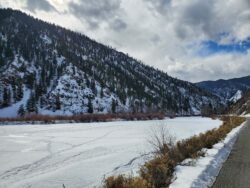 IDFG personnel began interviewing steelhead anglers between the Middle Fork Salmon River confluence and Challis, ID during the week of February 14th. Angler effort increased slightly during the weekend but was relatively low throughout the week. The highest amount of angler effort was observed in location code 17 between the Lemhi and Pahsimeroi rivers. 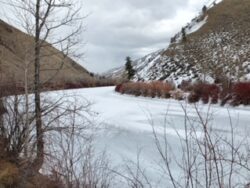 The Deadwater ice jam is still in place, and once it goes out we will issue a separate report to notify anglers. River conditions changed considerably throughout the week due to unseasonably warm weather that moved into the area. Over the weekend, the river had clear to slightly cloudy visibility upstream of Deadwater and muddy visibility downstream of Deadwater. On Sunday, river temperatures downstream of Deadwater were in the low 30s while river temperatures upstream in location codes 16 and 17 were in the low 40s. Colder temperatures moved back into the area Monday night and as of Tuesday morning, frazil ice was flowing through the town of Salmon. Currently the Salmon River is flowing at 854 cfs through the town of Salmon, ID which is 78% of average for today’s date.

We would also like to remind anglers that the Idaho Fish and Game Commission changed the steelhead daily bag limit for the spring 2022 steelhead season on the Salmon, Little Salmon, and Snake rivers to 2 fish per day, 6 in possession. These changes went into effect on January 1 and only apply to the to the 2022 spring steelhead season.