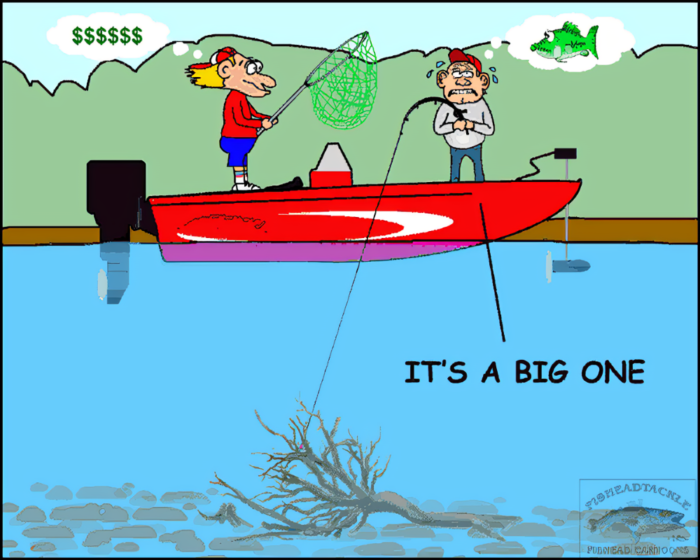 ANGLING, TANGLING, and GETTING SNAGGED!!!
By Montana Grant

Angling means tangling. Like it or not, you will get tangled line, snagged hooks and lures, and bird nests. Fishing line just has a way of creating amazing loops, curly cues, bird nests and ways to hook onto rocks and branches.

I loved to shad fish at a certain spot along the Susquehanna River. If I stood at just the right spot, I could cast upstream and let my line swing in front of what seemed like a snag or rock. Every swing brought a strike. If I went upstream or downstream, no luck except that a step downstream meant a snag and loss of lure. Later that Summer, I decided to explore the spot and see, from a fish’s viewpoint, what made the spot perfect. The water was lower and slower, so I put on a snorkel and mask and took a look. Sure enough, there was an old, branched tree, lots of debris, and some rocks. The trash had jammed itself between the rocks, which also made an eddy for fish to stack up.  

I also noticed that the snag was decorated with a tackle box full of lures, hooks, plugs, shad spoons and darts, and anything else fishermen threw at the snag. I started harvesting the snag and filled a huge sack with dozens of useable rigs.

Fish tend to stack up where they can easily find food, must spend less energy to hang in the water, and find shelter from predators. It is also in these Hot Spots that you usually find a snag.

I carry a pair of hand pruners when I fish. These pruners have saved me a ton of snagged flies. Several times, I have gotten snagged on sweepers in a river. These shoreside bent trees have fallen into the river and create great shelter for fish. They also are fly and lure thieves. A quick pruning can save your snag and allow you to harvest a boatload of other lost rigs.

When fishing along the bank, your back cast will locate other lure stealers. Before you rescue your fly, look for others. Rarely will you be the first to snag that branch. I once was wading along the Bighole River during the salmon fly hatch. Salmon fly flies are big and pricey. Most fishermen are drifting and trying to make that perfect cast next to the shore. This is where the big browns are waiting for the big bugs to fall off the branches. Sadly, if they get snagged, they quickly break the fly off. I waded up to one of these big branches and discovered 3 ½ dozen new and usable Salmon flies in several patterns. That made up some for the flies that I lost over the years.

One float on the Bighorn River rewarded me with more than a fly. As I was drifting through the Bighorn Rapids, I saw a hopper fly dangling from a bush. I was able to anchor the boat a little downstream and fished up to the spot. The bush held several useable flies. One fly trailed a long leader. When I pulled on the leader, I noticed fly line. After pulling the line, I found that it was connected to a Redington fly rod and reel. I guess whoever got snagged panicked and lost the whole setup. Maybe the rod was just dangling off the gunwale as the boat drifted past the bush and hooked up. The gear was dirty and needed some cleaning and maintenance, but the rod is still functioning today.

Log Jams and back eddies are also places to look for snagged gear and rigs. I often pick-up fly-fishing bobbers and line at these spots. Fly boxes, hats, boots, nets, and an amazing array of junk ends up in these catch all spots. I have also found halves of fishing rods, Go Pro cameras, and car keys. Normally I leave a note at the fishing access and hope for a response. If no one claims the gear, I pass it along to new fishermen and kids.

It is certainly a good idea to avoid snags, but…