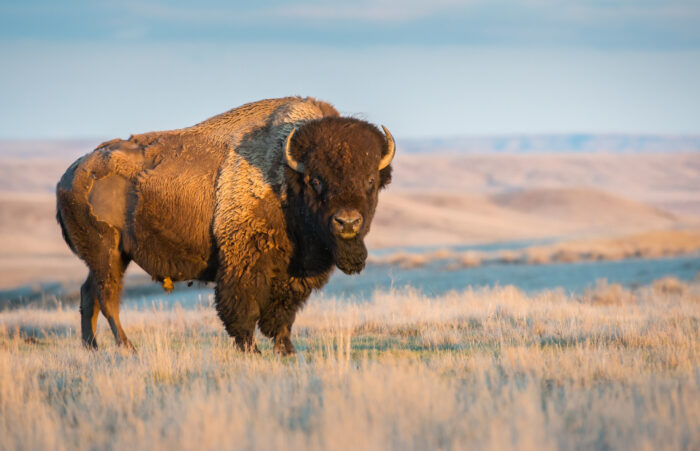 (MALTA, Mont.) – The Bureau of Land Management (BLM) has issued a proposed decision on a bison grazing proposal involving seven allotments in Phillips County, Montana, held by American Prairie (AP). In conjunction with the proposed decision, the BLM released an associated Environmental Assessment (EA) and Finding of No Significant Impact (FONSI).

The proposed decision would allow bison grazing on six of the seven BLM allotments in AP’s proposal. One common allotment grazed with another livestock operator would remain approved for cattle-only grazing. Seasonal grazing would be permitted on four of the allotments. Year-round grazing would be permitted on three allotments; two of which had been previously authorized for year-round bison grazing. There would be no change in AUMs on any of the allotments. The majority of internal fencing on BLM-administered lands would remain intact.

The proposed grazing decision, which describes the terms and conditions for each of the seven allotments, is based on existing laws, policies and management plans, and supported by the analysis brought forward in the EA/FONSI.

“Ultimately, the overall goals of any grazing decision are to ensure the health of BLM-administered public lands and implement the law,” said Acting Montana/Dakotas State Director Theresa Hanley. “This proposed grazing decision will help us continue to achieve those goals, providing for multiple-purpose use and enjoyment, now and in the future.”

The proposed grazing decision, and documents associated with the EA and FONSI are available on the BLM’s ePlanning website https://eplanning.blm.gov/eplanning-ui/project/103543/510.

“American Prairie’s proposal generated significant public interest and opinions, both opposing and in favor of their request,” Albers said. “We made sure interested publics had an opportunity to review and provide comment at each key stage of the NEPA process, and we received thousands of comments. That NEPA process helps us make decisions that are good for the land and the people involved, while complying with BLM policies, management plans and the law.”

The BLM will continue to keep the public informed of its land-management decisions. Following the proposed grazing decision’s 15-day protest period and managers’ consideration of any substantive protests from qualified interested parties, BLM will issue a final grazing decision, which initiates a 30-day appeal period in accordance with federal grazing regulations.

BACKGROUND: On Sept. 24, 2019, then American Prairie Reserve (now known as American Prairie) submitted a proposal (an update to their earlier proposal submitted on Nov. 20, 2017) to modify certain terms and conditions of seven BLM-administered grazing permits held by the AP within Phillips County, Montana.

American Prairie’s original proposal sought permit changes for 18 BLM grazing allotments located in four counties. They requested from BLM a change in class of livestock for cattle and/or bison, changes to the authorized seasons-of-use, construction, reconstruction and/or removal of some fences and adjustments to allotments (such as combining pastures).

The BLM conducted public scoping from April 9 through June 11, 2018, including public meetings held in those four counties. The BLM received 2,497 submissions which were reviewed and considered in determining the final set of issues to be included in the NEPA analysis. The AP’s updated proposal significantly reduced the number of BLM allotments involved and requested a more conventional grazing regime, including pasture rotation in alignment with current range management practices.

The BLM provided a 90-day public review and comment period for the preliminary Environmental Assessment and draft Finding of No Significant Impact (July 1 through Sept. 28). The BLM also conducted a virtual public meeting on July 21, 2021, intended to make it easier for those near and far to meaningfully and safely participate in this public process.The BLM received approximately 3,000 comments both for and against the proposal.

All public comments received were carefully considered and included in the EA analysis. The comments and BLM’s responses are contained in Public Comment Reports for each public comment period and are available under the Documents tab on the ePlanning website https://eplanning.blm.gov/eplanning-ui/project/103543/510.