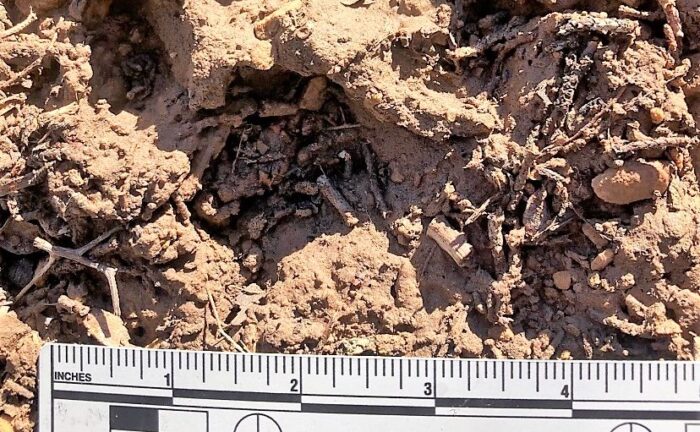 MONTEZUMA COUNTY, Colo. – Colorado Parks and Wildlife officers responded Sunday night after a mountain lion reportedly attacked a 47-year-old man near the community of Lebanon in Montezuma County. CPW is trying to locate the mountain lion involved in the incident.“This is an ongoing investigation,” said CPW district wildlife manager Matt Sturdevant. “We are still looking into it and want to make sure we get the right offending lion. Any help from the surrounding area and the public would be helpful.”At approximately 6:30 p.m. on Feb. 27, Michael D. Warren sustained several puncture wounds to his lower right leg from the reported mountain lion attack. Warren said he was inside his home when he heard a thud on his front porch, and his dogs inside the house began to bark aggressively. He believed his domestic cats might be fighting on the porch, so he went to investigate.Warren said he opened the door to his porch and placed his right leg in the opened door area while he tried to keep his dogs inside the house. Shortly after he placed his leg between the opened door and the porch, he felt something grab his leg. He looked and said he saw a mountain lion run away. Security camera footage later confirmed his mountain lion sighting.Warren called police dispatch to report the attack and also told dispatch that he did not want medical treatment.

Sturdevant was notified and responded along with DWMs Andy Brown and Rebecca DeVergie. The CPW officers conducted a site investigation and documented the injuries to the man’s leg. They observed several punctures on the lower right leg below the knee, indicative of punctures from claws.CPW made attempts to locate the mountain lion throughout the evening. Officers again responded to the area the morning of Feb. 28 and resumed the site investigation and ran hound dogs specifically trained for tracking mountain lions, but the hounds were unsuccessful in finding the mountain lion. CPW used the hounds in coordination with the USDA – Animal and Plant Health Inspection Service. CPW also has set a trap at the location of the incident.Warren had four domestic house cats. Two had recently gone missing, leading CPW to believe the mountain lion had previously visited the location and returned the night of the attack.Another mountain lion incident was reported Feb. 18 to CPW from the same area regarding the depredation of chickens and a cat.“Judging by the tracks we found and the footage we have along with the victim’s statement, we believe it is a young, sub-adult lion,” Sturdevant said. “We also believe it is the same lion that had been hanging out in the area for a bit.”Sunday night’s incident is the first reported mountain lion attack of a human in Colorado since March 11, 2020. This is the 23rd known attack of a mountain lion causing injury to a human in Colorado since 1990 and the first attack in southwest Colorado since 2008. Three other attacks in Colorado since 1990 have resulted in human deaths. CPW does not characterize lion depredation of pets or other animals as attacks.Though mountain lion attacks are relatively rare, it is important to know how to avoid or manage potential encounters. To learn more about living with mountain lions in Colorado, go to https://cpw.state.co.us/lions.

Photo caption: A mountain lion print is measured outside the home of a man who was reportedly clawed by a mountain lion on his porch Sunday night near the community of Lebanon in Montezuma County. Rebecca DeVergie/CPW