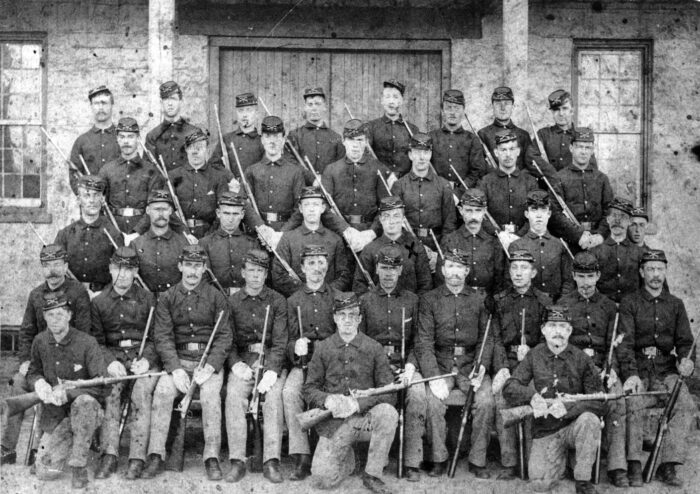 Pioneers and early soldiers used fishing to supplement their diets. Resident trout, catfish, and other finned fish were relatively easy to catch and cook. Fishing techniques were far from complicated.

Carrying fishing cord and hooks was common. Weights were often made from smashed lead bullets with a hole drilled into them. Even bottles served as fishing reels to wrap and cast a line.

Most native peoples and early settlers used the same skills and gear to catch their dinner. One fishing story about General Crooks troops talk about his encampment along Goose Creek Wyoming. His troops went fishing and caught an estimated 10,000 trout! When fish would migrate or spawn in small channels or streams, soldiers would stomp and kick the fish onto the bank.

Handlines    A simple stick or board, covered with a length of line would do the trick. Sinews for wild game or even thin vines would work in a pinch. There was no modern fishing line so a thin cord would have to suffice. Talented weavers could create line from connected lengths of horse tail fibers.   Poles    Fishing poles were often long willow branches. The longer length served as a lever to help set the hook. Lines were attached to the stick. No reels were available. A shorter stick was often used for ice fishing. Adding to small sticks about 6 inches apart would help wrap the line. Ther were also other innovative ways to contain their line.

Weirs and fish trap    these man-made fish catchers could be placed in narrow creeks or river flows to capture fish migrating up or downstream.

Nets   Using a large net on a large pole would help trap fish in deeper water. These nets were also used downstream with other fishermen scaring the fish toward the funneled net location.

Spearing or gigging   Many soldiers and pioneers would use a sharpened fork or sticks to stab their dinner. Frogs and other aquatic critters or small mammals also could be caught in this way.   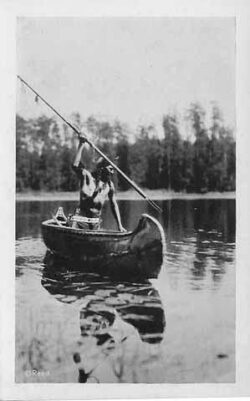 Bows and arrows      allowed anglers to shoot their dinner. Carp and larger fish were perfect targets. The arrowhead needed some modification to pass through the fish and have a barb to hold on.

Mussels, crayfish, and clams were also available to observant anglers.

Catch and release sport fishing was not even considered. Only an idiot would go to the trouble, and time, to catch a fish to throw it back. Many of the early pictures would show boatloads of fish being caught. In some cases, fish would be planted in gardens to serve as fertilizer. Dried or smoked fish could be fed to dogs or stored for weeks.

Most fish caught be soldiers were fried with bacon fat. Sometimes a fish stew, mixed with other foraged roots and protein, would make a great meal.