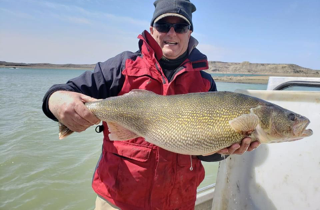 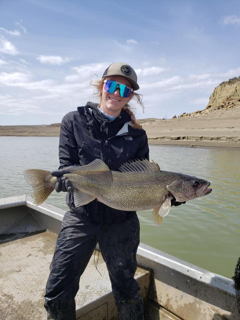 The weather has finally improved in the Big Dry Arm of Fort Peck Reservoir. It appears we’ve managed to catch a break with calmer conditions and very warm temperatures compared to last week. Water surface temperatures today while checking our trap net ranged from 45 to almost 49 degrees and it has really kicked walleye spawning activity into high gear!

The increase in water temperatures have lead to some very productive trap nets. In fact, some of the better trap nets have been collecting over 20 female walleye (combination of green and ripe), good numbers of male walleye, and a smorgasbord of other fish species. In addition, big numbers of green female walleye brought in to the holding pens are finally starting to ripen up and release their eggs.