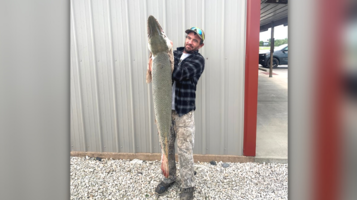 Here is an interesting press release by the Kansas Department of Wildlife and Parks from October of 2021 that reports about the first ever alligator gar caught in Kansas:

PRATT – When a lure drops below the water’s surface, it’s not always known what might rise to meet it. On a warm night late last month, one angler fishing the Neosho River east of Parsons caught something he probably never expected to see – a four and a half-foot, 39.5-pound Alligator Gar. The kicker? Alligator Gar aren’t native to Kansas and have never been documented here.

Though not always common, Alligator Gar are distributed from southwestern Ohio and southeastern Missouri and Illinois, south to the Gulf of Mexico, and a small portion of northeastern Mexico. A predatory fish, Alligator Gar are sometimes referred to as “living fossils” since fossil records trace them back nearly 100 million years. As the name implies, Alligator Gar are easily identified by their broad snouts that loosely resemble that of the American Alligator. Alligator Gar are the largest gar species with specimens weighing more than 300 pounds and measuring more than 8 feet long. Just three gar species are native to Kansas: Longnose, Shortnose, and Spotted Gar. Longnose Gar are the most common and largest gar species in Kansas. While the Longnose Gar are common in the state and reach lengths exceeding 5 feet, they are distinguished from the Alligator Gar by a narrow snout and smaller overall size, among other characteristics. So, Kansas Department of Wildlife and Parks Fisheries biologists must ask, “What’s an alligator gar doing in the Neosho River?”

It’s a good question, and one KDWP Fisheries biologists are attempting to answer.

“We’re confident the information from the angler is accurate and the fish was, in fact, caught from the Neosho River,” said KDWP Fisheries biologist Connor Ossowski. “However, that doesn’t mean the fish originated from the river.”

“Because most populations of this species can be distinguished from one another with a sample of the fish’s fins, another option we’re considering is genetic identification,” said KDWP assistant director of Fisheries research, Jeff Koch. “This will tell us if the fish came from an existing population in another state.”

If genetic testing doesn’t pan out, not all hope is lost; KDWP Fisheries biologists would still have one more option.

“Microchemistry is another technique at our disposal,” Koch added.

Microchemistry is performed by measuring the elemental proportion of a bone on a given fish and comparing it to the elemental concentration of a surrounding water. If consistencies exist, the data may be able to help Fisheries biologists determine at least how long the fish had been in the Neosho River.

Of all the potential scenarios for how this giant came to be in the Neosho River, there’s one hypothesis that rings the truest – the possibility that the Kansas-caught Alligator Gar was released from an aquarium.

“It’s not unlikely that this fish was once somebody’s pet or purchased from a pet store, and simply released into the river once it became too large,” said Doug Nygren, KDWP Fisheries Division director. “These techniques should allow us to determine which mode of introduction occurred.”

Time will tell if the Neosho River Alligator Gar made its way to the Sunflower State by natural or assisted means. While it would be very difficult for this fish to have made its way to Kansas naturally, due to the distance to the nearest population and the series of dams along the river, KDWP Fisheries biologists won’t jump to conclusions; they’ll do as they always have, which is rely on verifiable data from proven research methods.

Once their research is complete, KDWP Fisheries biologists will publish the results of this catch on ksoutdoors.com and on the Kansas Fisheries Division Facebook page at www.facebook.com/KDWPFisheries.

In the meantime, it’s important to note that transporting and releasing fish or other species in public waters, whether native or non-native, is illegal in Kansas. Chris Steffen, KDWP Aquatic Nuisance Species coordinator, warns, “Transporting and releasing fish risks spreading other harmful species such as microscopic zebra mussels, fish diseases, or aquatic vegetation that might be present in the water used to transport the fish.”

To report a rare species find in Kansas, email rare.species@ks.gov and visit  https://ksoutdoors.com/Services/Threatened-and-Endangered-Wildlife/Rare-Species-Sighting for more information.