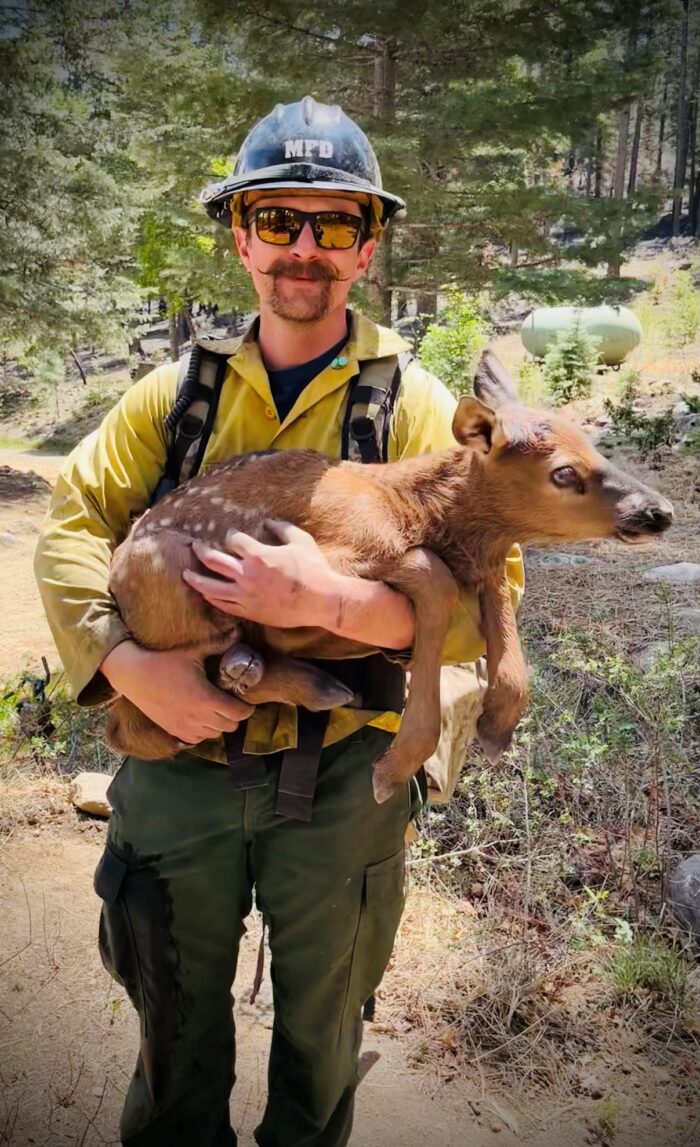 Last Saturday, May 21st, a Missoula Fire Department engine crew was checking the Gascon area of the Hermits Peak and Calf Creek Fires for residual heat, when they encountered something unexpected.
A young elk calf was alone in an area of severely burned forest. “She was lying quietly in a six-inch deep layer of white ash, surrounded by the blackened remains of fir trees”, says firefighter Nate Sink. The Missoula crew observed her for an hour, in hopes that her mother would return. Eventually, they approached, and finding no adult elk tracks nearby, they sought help for little “Cinder” down the road in Upper Rociada.
Fortunately, local ranchers Lisa and Carl Bartley knew just what to do. Their family veterinarian, Dr. Bill Brainard, recommended rehydrating Cinder with a mix of condensed milk and water, until specially formulated milk could be obtained. “Our dog, Brylee, was intent on doing his best to mother little Cinder”, reminisces Lisa Bartley.
Local Fish and Game Officer Logan Eshem recommended that Cinder be entrusted to the care of Dr. Ramsey (founder of New Mexico Wildlife Center in Espanola, NM). The Bartleys loaded Cinder into their truck and met Dr. Ramsey in Las Vegas, NM.
Cinder is now safe at the Cottonwood Veterinary clinic. She has gotten the hang of bottle-feeding, and a surrogate-mother elk at the refuge has taken on the duties of cleaning and bestowing affection on the little orphan. Cinder will spend an estimated four months at the refuge, before becoming eligible for release into the wild.
Back in Rociada, Lisa Bartley (Sapello-Rociada Fire Department) and Carl Bartley (Bonito Fire Department Chief for 13 years) have been working hard to protect their home and community from the Calf-Canyon Fire. At times they’ve been joined by their daughter Jennifer, who flies a Bell 212 helicopter for Plumas Helitack, and their firefighter son-in-law, Cole. “The fire hit our ranch with a vengeance”, says Lisa Bartley, “We’ve had the honor of working closely with many firefighters who’ve come to help, and have made great friends. We appreciate all of their work so much!”
And Carl and Lisa would be glad to welcome the little elk, Cinder, back to Upper Rociada when she is healthy enough to be released.