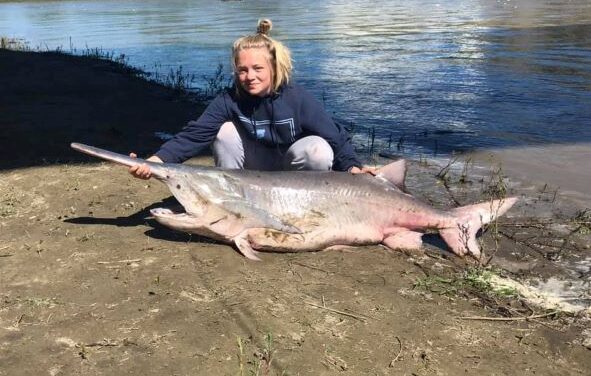 PADDLEFISH SEASON ON YELLOWSTONE, LOWER MISSOURI STARTS MAY 15
By angelamontana

MILES CITY – The 2022 paddlefishing season on the Yellowstone and Lower Missouri rivers will start on Sunday, May 15.

Anglers should be aware that the first two days of this season, Sunday and Monday, are not harvest days. Harvest days are Tuesdays, Wednesdays, Fridays and Saturdays on the Yellowstone and Lower Missouri. On Sundays, Mondays and Thursdays, anglers are limited to catch and release of paddlefish, and only at Intake Diversion Dam Fishing Access Site. No catch and release is allowed upstream or downstream from Intake.

So the first harvest day, open in all the yellow tag fishing area, is Tuesday, May 17.

There will be free fish cleaning services at Intake, but no eggs will be collected this season.

Mike Backes, Montana Fish, Wildlife & Parks fisheries manager for southeast Montana, said this week, “I have no guesses on the type of season we will have, considering a few fish are already at Intake, which historically doesn’t occur until the river reaches flows around 15,000-20,000 cubic feet per second or higher. The small pulse of water last week that maxed out around 10,000 cfs was very turbid, due to rain showers, but was enough to stimulate some paddlefish migration.”

In previous seasons, increasing flows would trigger paddlefish to migrate upstream to Intake Diversion Dam, where they would concentrate in large numbers. But this season there is a new bypass channel around the dam, which could significantly impact paddlefish concentrations downstream of the dam.

“Another unknown is how fish will react to the bypass channel,” Backes said. “I’m guessing they will continue to move upstream, reducing any big concentration at Intake until a large pulse of fish arrives with much higher river flows.”

Backes anticipates the start of Montana’s Yellowstone and Lower Missouri paddlefish season to be slower.

“In very general terms, I expect paddlefish harvest at Intake to be slow at least the first week, based on current flow predictions,” he said. “Success rates may be higher in the Sidney area the first week, but I also suspect a few paddlefish could be caught upstream of Intake opening week due to the turbid river pulse that occurred last week.”

The 2021 paddlefish season was 45 days long, lasting the entire season from May 15-June 30. According to Backes, river flows never triggered a large fish migration to Intake. The harvest cap of 1,000 fish was never reached, so the season never closed. Estimated harvest in 2021 was 777 fish.

FWP reminds anglers that anyone harvesting a paddlefish in Montana is required to report it within 48 hours. This is true even if anglers process their own fish. People can meet this requirement by reporting to the processing station at Intake FAS or by calling 1-877-FWP-WILD (1-877-397-9453) or 406-444-0356 or by visiting fwp.mt.gov and clicking on MyFWP.  The numbers are also found in the Montana fishing regulations as well as in the paddlefish regulations pamphlet.