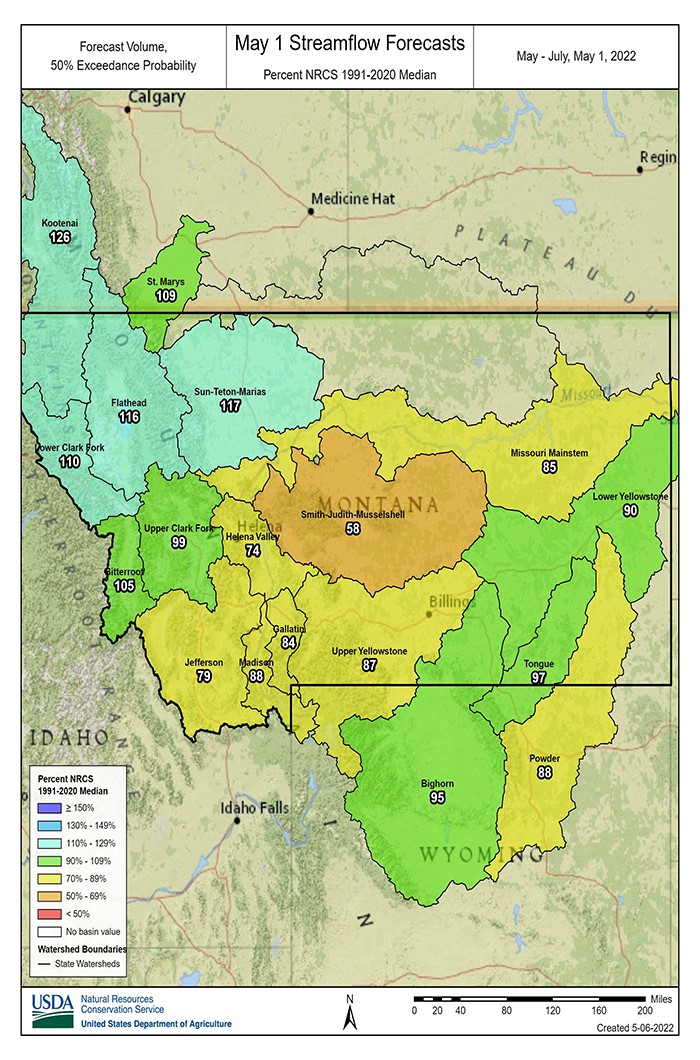 BOZEMAN, Montana, May 6, 2022 – After nearly three months of waiting for typical winter weather, cool temperatures and precipitation finally arrived during April in Montana. Prior to April, northwest Montana had been the largest recipient of precipitation this water year. “Weather patterns shifted last month, and April precipitation was slightly below normal in northwest Montana but well above normal in southcentral and southeast Montana,” said USDA Natural Resources Conservation Service (NRCS) Hydrologist Eric Larson. The Missouri headwaters and mainstem received near normal precipitation during April. The cool weather and precipitation resulted in snowpack percentage increases in all of Montana’s major river basins from April 1. The only exception is the Milk River basin which doesn’t have any snow remaining at the one SNOTEL site in the Bears Paw Mountains near Havre.

“A word of caution is necessary when referring to snowpack percentages this time of the year,” said Larson. Snowpack percentages indicate how conditions compare to previous years for a given date, but these percentages can be misleading early and late in the water year. The cool and wet weather last month slowed snowmelt that was initiated in March and many mid-elevation SNOTEL sites which normally melt significantly in April now have an above normal May 1 snowpack. This weather was certainly beneficial, but there was such a lack of precipitation from mid-January through March that April’s gains were not enough to make a full recovery. Many SNOTEL sites east of the Continental Divide peaked at levels that were well short of their normal peaks. In general, SNOTEL sites west of the Continental Divide received more consistent snowfall this winter and reached near normal snowpack peaks.

The delay in snowmelt due to cool April weather was reflected in the streamflows reported for April. Nearly all gages in the southwest, central, and southcentral portions of the state had below normal to well below normal streamflow this past month. “Current streamflow forecasts for the May through July time period reflect improved snowpack and precipitation conditions,” said Larson. In locations such as the Rocky Mountain Front and river basins west of the Continental Divide, the snowpack remains above normal, has yet to begin melting at the upper elevations, and consequently streamflows are forecasted to be near to above normal. Forecasts for southwest Montana, the mainstem of the Missouri, and the Yellowstone are looking much less grim than last month but remain below normal for May to July. There are still areas of concern such as the Shields and Musselshell rivers, which are forecast to be in the 40% to 55% of normal range for that period.

“As appealing as warm, sunny summer weather sounds, the best-case scenario over the next couple months is continued cool weather and more precipitation in locations that did not reach their typical peak snowpack levels,” said Larson. Many low elevation SNOTEL sites are currently melted out and typical melt out dates reach as far out as late June at higher elevations. Continued cool, cloudy weather would assist in holding onto to the snow longer and ultimately provide water later into the typically drier summer months.

A full report of conditions on May 1 can be found in the monthly Water Supply Outlook Report available on the Montana Snow Survey website. In addition, real-time snow survey data can be found at www.mt.nrcs.usda.gov under Snow Survey. 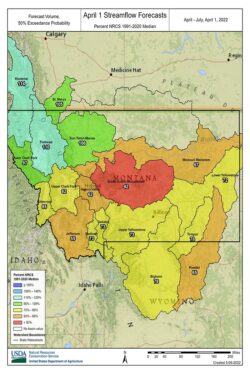 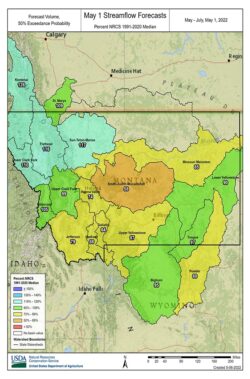