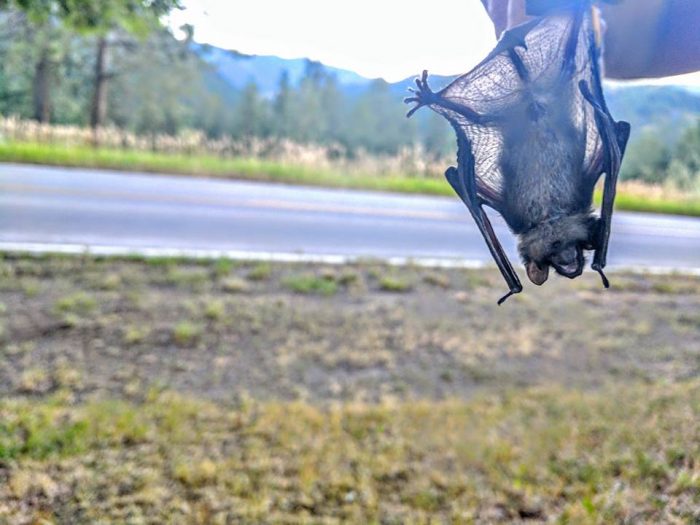 Biologists find drastic reduction of bats at Azure Cave, likely due to WNS
By angelamontana

ZORTMAN – A recent survey of bats at Azure Cave in Phillips County found a significant population reduction since last year, likely due to white-nose syndrome (WNS).

Biologists from Montana Fish, Wildlife & Parks, Montana Natural Heritage Program and Bureau of Land Management (BLM) conducted their regular winter survey in May. Azure Cave is a critical hibernating location for bats, hosting approximately 1,700 to 1,900 bats in a typical year. The May survey found a 98 percent reduction in bat numbers, with about 40 bats hibernating in the cave. Half of the remaining bats showed visible fungal growth associated with white-nose syndrome.

WNS is a fungal disease that has killed more than 6 million bats in North America since 2006. A powdery white fungus grows on the skin of hibernating bats, often on the face, leading to irritation and dehydration. This causes bats to arouse early from hibernation and exhaust fat stores they need to survive the winter, often leading to death.

WNS has been confirmed in 38 states and seven Canadian provinces. It can wipe out entire colonies of bats and has caused dramatic population declines for several species of bats in North America. Only bats are known to be affected by WNS, which does not pose a risk to humans, pets, livestock, or other wildlife.

“In the survey last year at Azure Cave, we saw that at least one third of the bats had visible fungus on their wings and face,” said Kristina Smucker, FWP nongame wildlife bureau chief. “We expected to see fewer bats this year but were hoping the population decline wouldn’t be as severe as we observed.”

Found throughout Montana, bats are an important component of the ecosystem and economy of Montana. They also are part of the unique biological diversity of Montana.

“A little brown bat can eat 1,200 mosquitoes in an hour,” notes Smucker. “Bats are really important for keeping insect populations in check – they help protect crops and timber from insect pests.”

Why is WNS in Azure Cave especially concerning?

Azure Cave is located on BLM land in the Little Rocky Mountains. Azure Cave was the largest known hibernating winter colony used by several “mouse-eared bat” (Myotis) species in the western U.S. outside of New Mexico, and the largest known winter colony of the little brown bat (Myotis lucifugus) in the western states. The little brown bat is of particular concern as it has suffered severe declines in the eastern and central regions of North America.

This year’s decline in Azure is consistent with WNS-associated declines in little brown bats observed in other states at similar sites.

Surveys conducted in Azure are part of annual, statewide surveillance efforts to track the spread of WNS in Montana. FWP and partners are monitoring more than 35 sites across the state for presence of the fungus and/or bats with symptoms of WNS. FWP first found the fungus in eastern Montana in 2020. Now, the fungus has been detected in eight counties in eastern Montana, and WNS has been confirmed in bats in three of them, including at Azure Cave in Phillips County.

People should not handle bats. Anyone who sees a dead or sick bat, group of bats, or finds bats in unexpected places should call a local FWP office to report the finding.

“Like other wildlife, bats may get sick or die for a variety of reasons,” said Emily Almberg, disease ecologist for Montana FWP. “We are particularly interested in investigating clusters of dead bats or bats that are found dead during the winter or early spring, as that may indicate WNS being the cause.”

People can report these discoveries to the FWP Wildlife Health Lab in Bozeman at 406-577-7882, or they can contact a biologist at their local FWP office.