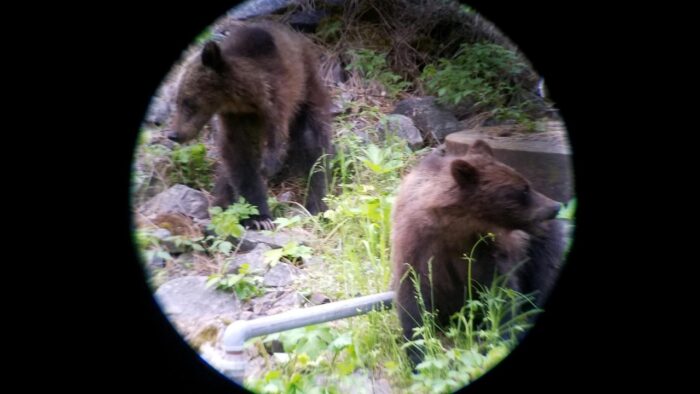 BONNER – Wildlife officials captured two grizzly bears in the lower Blackfoot Valley on Sunday, May 29. One was relocated to a remote area the next day and the other was euthanized due to an old injury that led to a serious infection.

The two-year-old female grizzlies were remaining close to homes along Highway 200, approximately 10 miles up the Blackfoot Valley from the town of Bonner. In consultation with the U.S. Fish & Wildlife Service, Montana Fish, Wildlife & Parks (FWP) crews trapped the bears as a proactive measure to prevent conflicts in this rural neighborhood and to better assess an injury spotted on one of the bears.

FWP biologists worked with a local veterinarian to diagnose the bear’s injury and determine if treatment was an option. The bear had a serious infection, stemming from an old injury that had caused the bear to lose its foot. Specialists were unable to determine the cause because too much time had passed since the injury occurred; causes could include a trap, gunshot wound or natural accident.

The infection had progressed to a point that the bear had to be euthanized. The other grizzly was relocated to a remote area near the headwaters of Boles Creek.

FWP specialists work to help landowners and communities avoid bear conflicts. Montana is bear country with populations of grizzly and black bears that frequent higher and lower elevations, especially river corridors. Preventing a conflict is easier than dealing with one.

If you see a bear or bear sign near your residence or need to report a conflict, please call your local bear specialist at the contact number found on FWP’s website: fwp.mt.gov/conservation/wildlife-management/bear/contact.