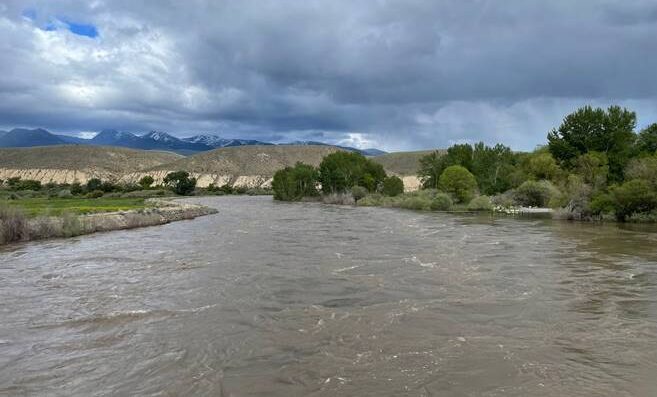 Hopefully all of you have already heard the good news – the IDFG Commission accepted the summer Chinook fishing season proposals for the upper Salmon River, South Fork Salmon River and Lochsa River yesterday.  The season will open this weekend (June 18th), full details can be found here. The upper Salmon River will be open from the mouth of the North Fork Salmon River upstream to the posted boundary downstream of the Sawtooth Hatchery weir. The daily limit will be 4 Chinook salmon, only 2 of which may be adults. The season will be open 7 days per week until a closure order is issued by the Director of IDFG or August 7th, whichever comes first.

I heard from a few of you yesterday afternoon about the upper Salmon River returns, run timing, and what we can expect for harvest shares, so here’s the weekly update…

The Sawtooth return over Bonneville Dam has tapered off a bit, and is coming in slightly below the pre-season forecast. About a week went by without any PIT tagged Sawtooth fish crossing Bonneville until yesterday when we picked up one more PIT tag, so this run is about complete. Currently, there are ~2,500 adult Chinook returning to Sawtooth hatchery over Bonneville, and of those fish, about 1,700 are over Lower Granite Dam. Based on these most recent numbers, and in combination of some Sawtooth hatchery fish returning from Yankee Fork Salmon River releases, we anticipate a harvest share of around 650 fish. This number will continue to be updated as we monitor the last of the run and the survival between dams. As I mentioned last week, so far survival has been a bit higher than average, and it has continued that way, averaging 83% survival from Bonneville to Lower Granite, compared to 66% historically. It generally takes Sawtooth fish about 2-3 weeks to make it from Lower Granite Dam to the upper Salmon River – to date, we haven’t encountered a PIT tagged adult Chinook from Sawtooth at any of the upper Salmon River arrays, and flows throughout the Salmon River basin are slowing fish migration.

The Pahsimeroi return is still looking good, and we’re about 75% through this run at Bonneville. We currently have about 2,100 Pahsimeroi fish over Bonneville Dam compared to the pre-season forecast of 1,200 fish.  Only about 675 of this fish have made it over Lower Granite Dam at this time, and this is likely related to their generally later migration timing, as well as the higher flows mentioned above that are slowing migration. Currently, we are anticipating a harvest share of about 750 fish from the Pahsimeroi return, and as like the Sawtooth return, harvest shares will continue to be updated as the run progresses based on PIT tags and survival on their way upstream.

River conditions in the upper Salmon are going to make the opening weekend a bit difficult for Chinook anglers. Like many places across the state and the West, we received a significant amount of rain over the past week. That, combined with snowmelt, has resulted in high, off-colored water. The picture below is from the Salmon River at the Carmen boat ramp on Monday evening, as flows were peaking in the upper Salmon River.

This picture (below) is from the Lemhi hole (the confluence of the Lemhi River and Salmon River near Salmon) from this morning: 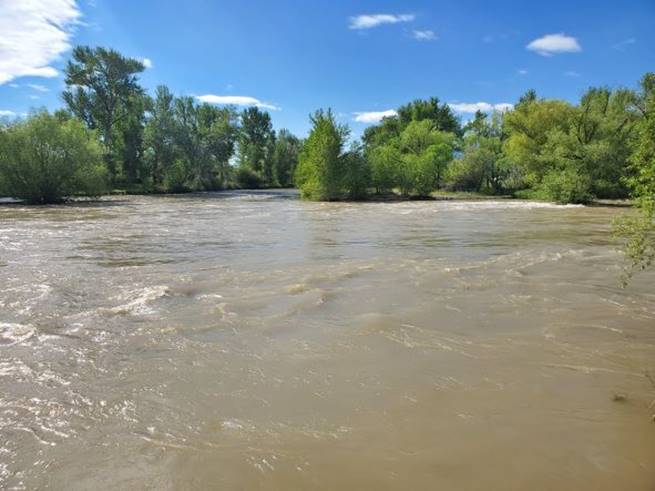 Below are flows observed at the two main stream flow gauges in the upper Salmon (near Salmon and near Clayton). As you can see, flows are well above average but they seem to have peaked the other day and are now dropping. With forecasted temps approaching the mid-80’s over the next couple of days, I think we might see another small spike in flows as high-country snow continues to melt. 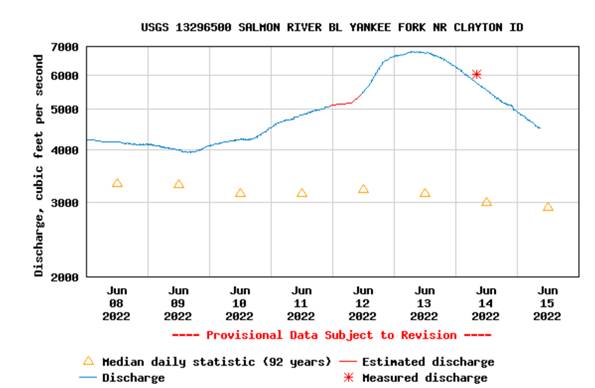 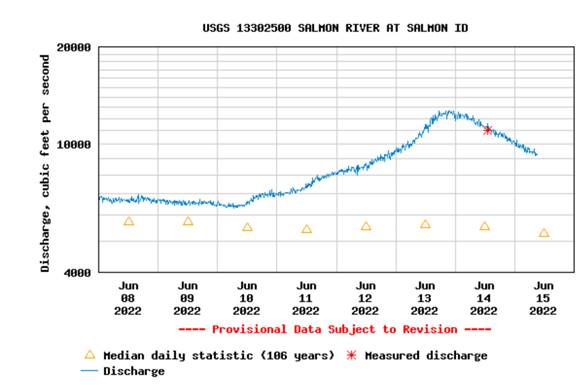 Based on migration timing and river conditions, I don’t expect a lot of successful Chinook anglers this opening weekend. Hopefully river conditions improve over the next week or so, and when they do, fishing should pick up by the last week of June and first week of July.

Thanks, and stay tuned for more updates.