The current heat has also heated up Canyon Ferry reservoir. Handy Randy and I went for an early morning walleye trek the other day. Current reports had been promising. Fish were reported to be in shallow waters early.   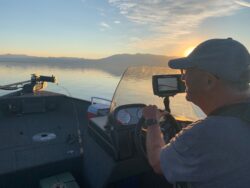 We were the first boat in at Silos. Mosquitos greeted us as we quickly launched. This was when the Giant moon had set, and the sun would soon rise. The water is like glass early in the morning. Cruising across is magical to boaters.

We planned to head north and drift the shallower waters where early walleye feed. Our fish finder marked fish that were inactive. Carp were rolling and flopping around on the shorelines. We fished the traditional worms on jigs, plastics. 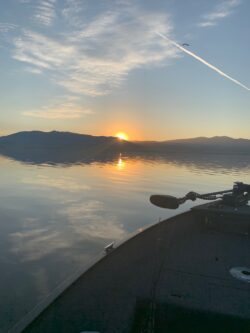 Handy Randy caught our first walleye. Later he hooked and lost a huge rainbow. Despite our best efforts, that is the report for the day. Some days it is more about fishing than catching.

We talked with several other boaters that were having the same luckless trips. No one was bragging and all had the same explanations.

The water was too warm! We were recording 70-degree water temperatures. My guess is that the fish fed during the night using the light from the Super Moon. The fish we marked were in schools and suspended.

It is rare when Montana Grant gets skunked but… I did capture a limit of fun, relaxation, and quality time with a friend. The fish are just the excuse to get out on the water early. I never regret the sounds, smells, feel, and fun of the outdoors. The feel is the same as when we first experienced fishing as a kid.