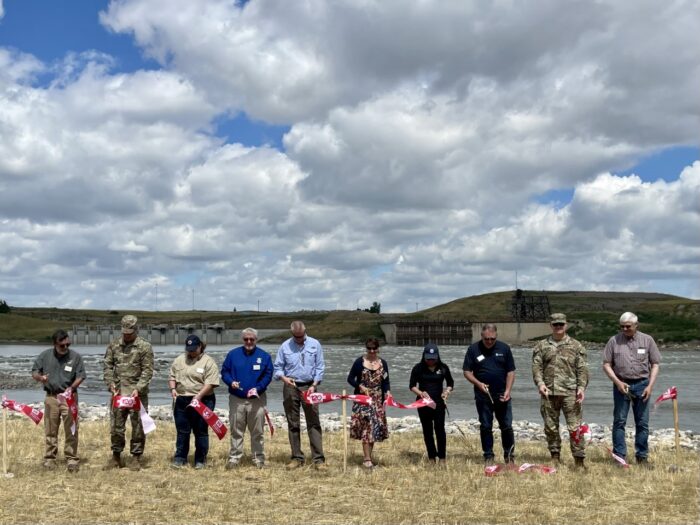 The Department of the Interior’s Assistant Secretary of Water and Science Tanya Trujillo, and Reclamation’s Commissioner Camille Calimlim Touton attended the ceremony to commemorate Reclamation’s 120 years of history and the success of the three-year, $44 million construction project.

“The successful completion of the bypass channel wouldn’t have happened without years of inter-agency coordination from some of the dedicated civil servants here today,” Touton said. “I want to thank each and every one of you for your hard work to support and sustain the mighty pallid sturgeon while also embracing our unwavering commitment and customer service to the project’s water users.”

Trujillo and Touton released juvenile pallid sturgeons into the Yellowstone River to mark the importance of the completion of the fish bypass to help conserve the continued survival the endangered species.

Construction on the channel started in April 2019 and was recently completed with the removal of the cofferdams on April 9, 2022. The 2.1-mile-long channel was constructed as part of the Lower Yellowstone Intake Diversion Dam Fish Passage Project that was designed to address fish passage concerns associated with the intake diversion dam.

In 1990, pallid sturgeons were listed as endangered by the U.S. Fish and Wildlife Service under the Endangered Species Act.  USACE, the Wildlife Service, and Reclamation have been working in partnership to determine the effects of the Lower Yellowstone Project on the species. Two primary issues were identified, entrainment into the Lower Yellowstone main canal and lack of passage success over Intake Diversion Dam. A new screened headworks structure was completed in 2012 and addressed the canal entrainment issue.  The new weir in conjunction with the bypass channel will provide passage and open approximately 165 river miles of potential spawning and larval drift habitat in the Yellowstone River.

The Lower Yellowstone Project is a 58,000-acre irrigation project located in eastern Montana and western North Dakota. The project is operated and maintained by the Lower Yellowstone Irrigation District Board of Control under contract with Reclamation. The project includes the intake diversion dam, a screened headworks structure, 71 miles of main canal, 225 miles of laterals and 118 miles of drains, three pumping plants on the main canal, four supplemental pumps on the Yellowstone River and one supplemental pump on the Missouri River.