R5: VARIABLE WEATHER, HIGH WINDS, SIGNS OF THE RUT ACROSS REGION 5 IN WEEK 3
By angelamontana

On Saturday, winds in the Columbus area exceeded 50 miles per hour, and hunter numbers reflected these poor conditions. The Columbus check station had the second lowest number of hunters ever recorded for week three. Big Timber and Billings, on the other hand, saw numbers that were equal to or just above the yearly average. Lavina was the busiest check station in the region over the weekend, with a record 178 hunters.

With hunter numbers down in some areas, success rates were higher than long-term averages across the region.

“Despite complaints of low mule deer numbers, we checked some of the largest mule deer bucks I’ve seen in several years and the rut is just getting started. It will be interesting to see what buck size we see during the peak of the rut,” said FWP wildlife biologist Justin Paugh in Big Timber.

Total harvested whitetail and mule deer were below long-term averages across the region, but elk harvest was up at Big Timber, Lavina and Billings check stations. New regulations and hunting district boundaries impacted elk hunting opportunities in districts 575, 580 and new district 515. These districts now allow the taking of either-sex elk.

FWP will also be available at each check station to sample harvested deer and elk for chronic wasting disease (CWD). Animals can also be tested at the regional office in Billings, Monday through Friday from 8 a.m. to 5 p.m. Testing for CWD is voluntary and free for the public. More information on CWD in Montana is available here: https://fwp.mt.gov/conservation/chronic-wasting-disease.

Hunting regulations for deer, elk and antelope are available at Region 5 headquarters in Billings, or online at: https://fwp.mt.gov/binaries/content/assets/fwp/hunt/regulations/2022/2022-dea-regulations-final-for-web.pdf

No Region 5 check stations operated in 2020 due to pandemic. 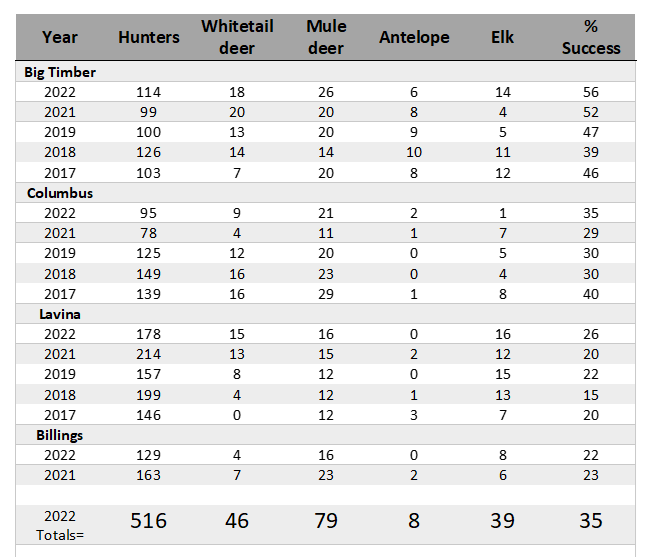