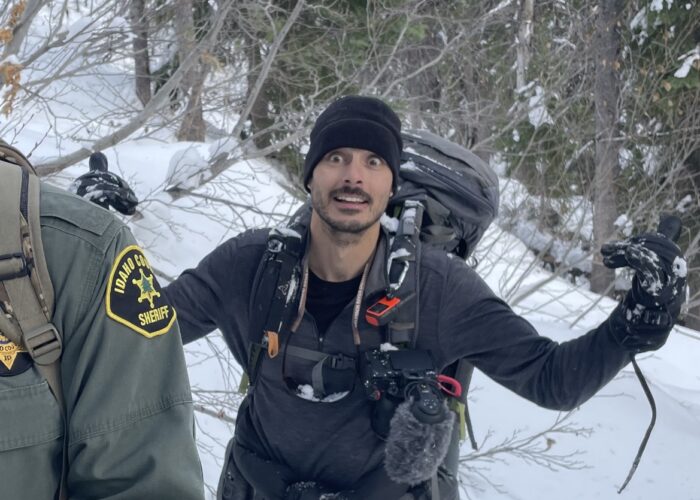 From the Idaho County Sheriff’s Office
On November 15, 2022, around 5:20 PM, Idaho County Dispatch received a call from the International Emergency Response Coordination Center. They had received an SOS from a Garmin Inreach device belonging to Jonathan Conti, videographer/Youtuber, of Boise, ID.
The location given was just north of the Walton Lakes, which is south of the Powell Ranger Station, between the Elk Summit Rd (Forest Service Road 360) and Tom Beal Park Road (Forest Service Road 362).
Idaho County Dispatch used the link provided by IERCC to message with Conti. Conti stated he needed rescued as he had snowshoed in but had dropped down into a canyon that he couldn’t climb out of due to the snow being too thick. He had food, water and shelter and was safe for the night. He had parked his vehicle on Elk Summit Road about five miles from his location and was not familiar with the area but told Dispatch that he could make it to Walton Lake if that was a better rescue spot.
On November 16, 2022, Idaho County Sergeant Keith Olsen and Idaho County Deputy Stan Denham responded at first light. Idaho County Dispatch advised Conti to head to the Walton Lakes Trailhead, which was about ½ a mile from his location, and gave him coordinates to where he could be picked up by the deputies.
Idaho County Deputies left the Powell Ranger Station by snowmobile on the Tom Beal Road. They cut out numerous fallen trees out of the road to get to the Walton Lakes Trailhead.
During this time, Idaho County Dispatch kept sending Conti messages with directions on how to get to the trailhead to meet the deputies and Dispatch continued to get responses from him stating “What are you talking about?”, “I feel like I should wait at this lake,” “I need someone to come get me at this lake, that’s why I called for a rescue.”
Dispatch urged Conti to get to the 362 Road and to go slow and steady and take his time as there were no alternative options. Conti advised he wanted a helicopter because walking out was impossible as there was five feet of snow, and the trail was gone. Dispatch again urged and explained to Conti how to get to where he would need to meet the deputies and that it was not possible for a helicopter to land on a frozen lake. Deputies could only get so far by snowmobile as they hit a rock face and would need him to hike up to meet them.
Conti replied, “Fine, but I feel like I’m walking to disaster.” Conti then walked about 1/3 of a mile in the wrong direction before going back to Walton Lake and sending a message to Dispatch at about 12:45 PM stating that he had stopped to set up camp as he was out of food, out of energy and was scared.
With this information, deputies left the trailhead and hiked down to Conti’s location which was approximately ½ of a mile in approximately two feet of snow. Conti was found to be in good physical condition with no injuries and still had plenty of food and provisions in his backpack.
Deputies helped Conti gather up his camp and walked him to the trailhead. He was taken by snowmobile back to the Ranger Station where the deputy’s patrol vehicles were parked, and then given a ride back to his vehicle on Forest Service Road 360.
We would like to remind everyone that while having a GPS activated device can be lifesaving and a good tool to always have on hand in case of an emergency, you should still prepare yourself for any adventure in the wilderness, especially this time of year, by doing research on the area you are going and having a plan in place in case you get too tired to continue on.