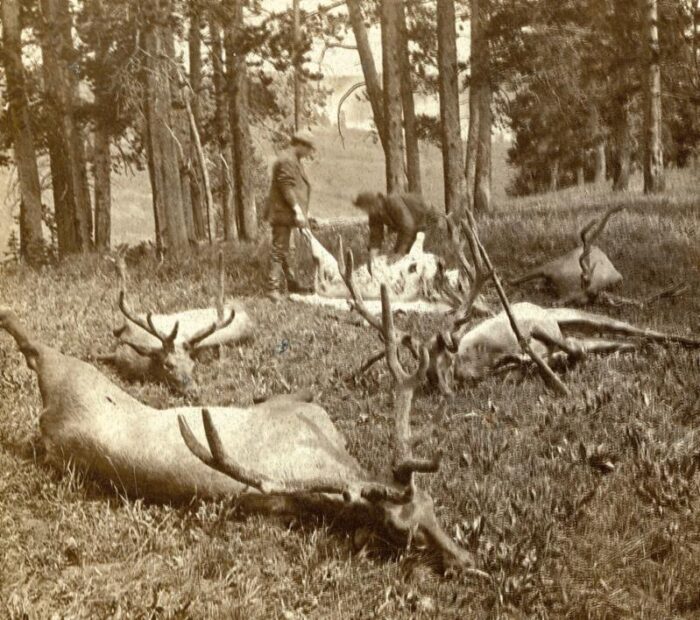 HUNTING IN THE PARK!!!
By Montana Grant

Now before you get too excited, there is currently no legal hunting in Yellowstone National Park. This has not always been the case. It seems like any place of abundance, like the park, has been a hunter’s destination for thousands of years.

Evidence of the first hunters in the park has been found at Gardiner. Arrowheads and campsites have been discovered that date back over 11,000 years. Clovis atlatl points were discovered in that site by archaeologists.

The only Native peoples that lived year around in the park are the “Sheepeaters”. This tribe also resided in the Mammoth area of the park. These people were a branch of the Bannock and Shoshone tribes. They were known for using dogs to pull sleds. Evidence of their villages can still be found in the high remote areas where they hunted Bighorn Sheep.

Many native people seasonally hunted the park. This was not, however, a truce/ peaceful venture. Tribes fought and competed for resources such as horses, minerals, wildlife, and kidnapped other tribal members. Obsidian was mined in the park to make arrowheads, spear points, tools, and knives. These edges were surgical sharp and lethal.

When the area was made into a park in 1872, the native peoples were encouraged to leave the area. The story was that these people feared the geothermal features as bad medicine. Poachers, guides, and sportsmen from around the world flocked int the park and did their worst. 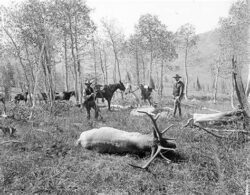 The pre park service era lasted from 1872-1916. The only park protection was by a small contingent of US Calvary. Public hunting in the park was banned in 1883, but that did not stop it. The first poacher was arrested in 1884 after he shot several bison. In 1887, additional Calvary was posted to help protect the declining wildlife population. The soldier cabin at Norris Junction remains. 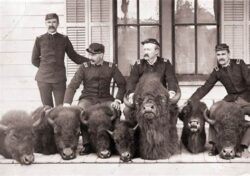 Every early expedition, soldier camp, and authorized tourists hunted and fished for food. Roosevelt lodge was President Teddy Roosevelts base of operation as he hunted all the park’s notable critters. Guests, politicians, wealthy folks, and others also enjoyed the private hunting opportunities.

Hunting from 1916-1960’s happened on occasion. Wolves were eliminated from the park by 1930, to protect other big game species. The elk and deer populations. Culling was started in 1935 to shoot, trap, and remove animals that exceeded the park’s Carrying Capacity. This lasted until the late 1960’s.

In 1974 the Natural Regulation Paradigm was instituted, and the environment was to be left alone to whatever nature did. This hands-off policy meant that fires were not put out, and populations were allowed to do as they would. The summer fires of 1988 made the Park Service re-evaluate this policy. Fire protection/prevention has begun. Culling of Bison was started and wolves, from Canada, were reintroduced into the ecosystem.

Today Yellowstone Park allows no hunting, except for bison culling. This is done through the Federal agencies. Some bison are relocated to other parks and indigenous people’s reservations. Others are slaughtered and given to the reservations. National Park Rangers patrol and protect the park.

The only natural big game hunters today are the predators.

Hunt for the good life!