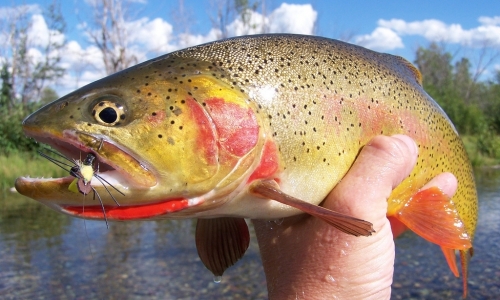 It was a great trip to Fort Peck
By Hookemharry

Fort Peck! Just the name sends excitement through anglers of all ages.

If you’re a boat angler and have fished Fort Peck Reservoir, then you know how much fun and challenging this massive body of water in eastern Montana can be.

Walleye, lake trout, northern pike, Chinook salmon and smallmouth bass are just a few of the fish in Fort Peck. And if the stars are aligned and you happen to be lucky, you have a chance to catch all of these fish in one day. I have never accomplished it but I am sure some angler has.

My trip last week with my son Harry was the first time in a number of years we’ve fished the lake. And, we were on hand for 2009 Walleye Fall Classic.

Fifty-six 2-person teams paid $250 to compete for a $3,000 first place prize. The unstable weather that hit Montana made Thursday and Friday feel more like May than August. The cold front certainly made it more challenging to try and figure out a walleye bite that slowed down considerably once the temperature dropped 20 degrees down to the 70’s instead of the normal 90s at this time of year.

Nine teams ended the first day with no weighable fish. Local Glasgow anglers Todd Riggs and Ken Schmidt, who fish Fort Peck very wellm caught five walleyes the first day for a total weight of 35.44 pounds. I asked Riggs to give me an idea on what they were doing.

“We found the fish while pre-fishing in 40 feet of water on Friday,” said Riggs. “We were hoping they would be active Saturday during the tourney and they were as we caught around 40 fish.”

The cold front had pushed the walleyes into deeper water and most of the anglers that didn’t adjust to the change in depth weren’t successful.

Until the weather changed, the anglers were catching walleyes in 25-30 foot of water.

The next day, Riggs and Schmidt caught 15.8 pounds but it wasn’t enough to hold on for first place. Norm Sillerud and JR Rasmusan, also from Glasgow, caught 23.98 pounds on day two. Their first day total was 28.03 pounds to take first with a total of 52.01 pounds for the tourney.

Schmidt and Riggs were not far behind with 51.24 pounds and they were closely followed by Dave Gregor of Gallatin Valley and Jim Muscat from Bozeman who came in with a two-day total of 50.45 pounds. All six of those anglers are familiar with finishing in the top tier at tournaments held throughout the summer around the state.

They performed well under the tough weather conditions that lea up to the tournament and made the right adjustments.

It was fun for me to see and fish Fort Peck again. It was also great to see the boat ramp by the Marina used for the first summer in about 8 years thanks to rising water levels in the lake over the last year.