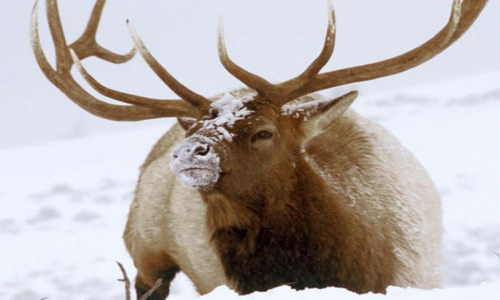 A case of the Hunters Hangover
By Hookemharry

If you love hunting the way I do, then you probably woke up Monday morning with the dreaded Hunters Hangover!

No more elk and deer hunting. You put away the hunters orange. You clean and put the rifle back in the gun safe. And you stand there – lost and trying to figure out what to do with your life.

I still have not put my trigger finger on why I have this hangover. After all, I had a very successful year by my standards. I was able to bag a respectable antelope and my son Harry, on that same trip over east, was able to shoot a wall hanger.

I was fortunate to draw an A-9 tag for antlerless elk and then was even more fortunate to bag a three year old cow the second week of the season. I still had my over the counter elk tag to fill and once the cow was in the freezer I focused my hunting efforts on a shooting a bull.

That plan would have worked out just fine if I had taken advantage of two opportunities that presented themselves in the fourth and fifth weeks of the season. They were missed opportunities – one a missed shot while the other came on a bull only about 35 to 40 yards away when I spotted him in the timber. The angle of my shot was not ideal when I kicked him out of his bed, so I passed.

The bull made his way through the timber as only elk do, moving back and forth down the mountain through the trees, obviously not wanting to give me one more chance.

I tracked the bull hoping it would slow down and eventually give me a clear shot. It had picked up another elk as it made its escape. I could only see the body of the other elk through the trees so I didn’t know at the time if it was a cow or another bull.

I followed the two bulls out into a clearing that seemed to go for miles. There they were, walking more than 600 yards away.

On Thanksgiving morning Harry, my 10-year-old daughter Maris and I decided it was time to go hunting for a white-tailed deer. By a little after 8 a.m., we had downed two nice bucks with Harry shooting a nice a good looking 4 point. You may view Harry’s white tail on www.montanaoutdoor.com.

Early Sunday morning, I was off elk hunting in an area that was relatively new to me. After walking in the dark for an hour and half to the top of the ridge, all I came across was the sign of elk that had been in the area a few days ago.

Whatever the reason, it is time to move on and be thankful for the hunting season that just concluded. Ice fishing anyone?