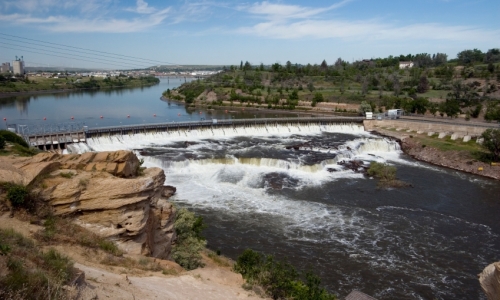 Had a great time at Great Falls
By Hookemharry

I attended the Great Rockies Sport Show last weekend in Great Falls. It was one of the best shows that Bill Reier, Jr., of Bozeman, has put together for the Electric City.

The Montana Expo Park was full of exhibitors from around the world. Booths promoted hunts and safaris to Africa, fishing in New Zealand, hunting and fishing in Canada, steelhead fishing in Idaho and even fishing on Flathead Lake.

Over the years, I have gotten to know quite a few folks in the Great Falls area and it was nice to be brought up to speed on what the hunting and fishing picture is for the area.

Much of the conversation had to do with Tiber Reservoir, about 80 miles north of Great Falls.

Ferguson and other members of the Great Falls Chapter of Walleyes Unlimited are very active in Great Falls promoting fishing to kids. They hold a kids fishing day in June where they give out close to 1,000 rods and reels to kids and also hold a walleye fishing camp for kids on Tiber Reservoir every August.

Speaking of Tiber, I spoke to Brent Hamernick from Missoula last week and he said the ice fishing on Tiber during his annual trip in December was slower than normal. “We didn’t catch the numbers like we have in the past but some of walleyes we caught were really nice fish,” said Hamernick, who plans on fishing Tiber again later on this month.

Lenard Roberts, of Roberts Bait and Tackle, told me the fishing never did really pick up last summer on Tiber. “The fish that were being caught on Tiber were small for the most part. It didn’t seem that fisherman ever got into the nice 16-18 inch class fish like they did the summer before.”

Dennis Hansen, from Chester, stopped by to say hi and told me ice fishing on Fresno Reservoir was not bad. “They are catching some nice walleyes that are 15- 16 inches but the fish really fat,” he said.

Most of the folks that I spoke with that fish Fort Peck Reservoir are very excited about fishing the big lake in eastern Montana. The water level prediction is still positive despite the below-normal snowpack in most of Montana.

For now anyway, experts are predicting the water level to stay the same this summer or continue the trend of coming up as the water has the last couple of years on the 134 mile lake.

In fact, The Crooked Creek Chapter of Walleyes Unlimited, based out of Lewistown, is planning to hold their Fall Classic walleye tournament out of Fourchette Bay this August. The last few years it has been at the Fort Peck Dam, because of lower water levels.

If the lake keeps rising, next year the tournament is scheduled to take place out Crooked Creek, its original home base, where that boat ramp has been high and dry for almost 10 years.