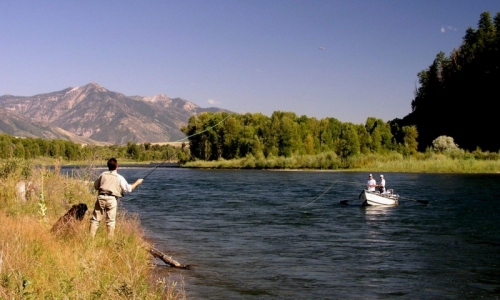 Fishing reports from folks throughout Montana this week have been positive. Whether you want to try your hand at catching trout, kokanee salmon, walleye, northern pike, or bass there is a lake or river close by that you just might be successful. This is the fourth weekend of July coming up and during normal year’s river and some lake fishing starts to slow. This year with the added water the area received a few weeks ago conditions are as good as they have ever been this time of the year.

All the local rivers have large caddis hatches every evening. The predominant mayfly right now is the Pale Morning Dun (PMD). They hatch in the morning, starting between 9 and 10am and continue until noon or 1pm. Anglers are fishing the hours between the PMD and caddis hatches with either nymphs or dry attractor patterns according to Doug Persico from Rock Creek Fisherman’s Mercantile.

“Northern pike fishing is really good on the lower Flathead River”, added Bill Brown from Bob Wards in Missoula, “some anglers are using spoons like daredevils or the five of diamonds and others are drifting sucker meat along the bottom”. The smallmouth bass have moved to the 15-20 foot depth on the Flathead River, Brown also reported.

“Georgetown Lake has been doing very well for trout” said Don Beardsley recently on the my local Catchin the Big Ones radio show from Rubys Café, heard on KGVO 1290 am Missoula every Friday morning from 8-9am. Beardsley reported that shore and boat trollers are having equal success. Reports out of Camp Tuff It on Lake Mary Ronan tell me that the kokanee salmon are still biting. Anglers are using crawdads and corn instead of maggots. The kokanee salmon night fishing on Holter Reservoir has also been fair. “Some anglers are catching some kokanee during the day while they are fishing for trout, said Beardsley. The trout fishing still is very good on all three of the reservoirs over by Helena too! Anglers are trolling a rainbow rapala about two to three colors for the best results.

“Flathead Lake trout fishing was slowed a couple of days with the winds we have had”, said Matt McCombs from Mo Fisch Charters. When boat anglers can get on the water McCombs suggest targeting suspended fish with a squid and dodger twenty to 30 feet deep. “The whole bait set-up is still producing some nice lake trout”, added Dick Zimmer from Zimmer Tackle in Pablo, “anchor in about 100 to 130 feet of water around Finley Point”. Zimmer also reports that anglers are having the best luck jigging in 200-250 feet of water in Blue Bay and off of the northwest corner of Bird Island.

The Great Montana Mack is fast approaching on Flathead Lake. “We are gearing up for the derby which based out of Dels Bar in Somers,” said Gene Fincher derby organizer. This year the two-day fishing derby which attracted 457 fisherman last year will take place Saturday-Sunday August 7-8. To enter stop into Dels Bar in Somers, entry fee is $25.