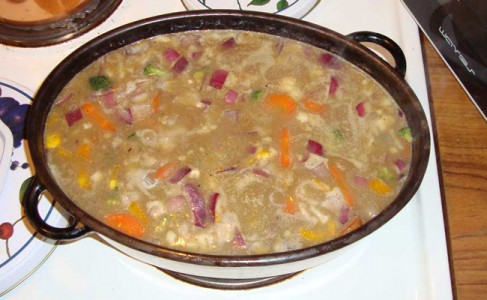 I have talked to several bear hunters while in the woods myself hunting grouse. They all have something in common and it is the same question. They all want a recipe to cook the bear they have harvested or plan to harvest. All bear meat should be cooked well done because they can carry trichinosis. The recipe I like to suggest is Bear Stew.

One cup flour to coat the bear meat

Two bay leaves – remove from stew after cooking the stew

Pour the olive oil into a Dutch oven or large stock pot and heat, add the floured bear meat, onions and garlic. Stir well to keep meat from sticking to cooking vessel. After browning add the beef broth and all other ingredients, except for the peas. Add the peas about fifteen minutes before removing stew from heat. Simmer for sixty to ninety minutes or until meat is tender. Be sure to stir occasionally to be sure the stew does not stick to pot. If you need more broth add if needed . When done the stew should be thick and juicy and the meat should be tender. Enjoy! Serve with warmed home made bread and butter.