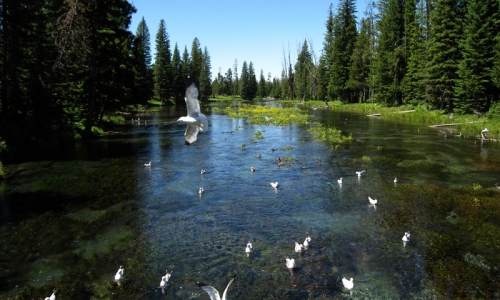 Spring is almost here in Montana
By Hookemharry

The first day of spring is less than two weeks away. It may be hard for you to believe spring is right around the corner but it is. Sure signs of spring are all around us. Missoula’s only radio show devoted to fishing started its 25th year broadcasting on KGVO 1290am. Catchin’ the Big Ones airs every Friday morning from 8-9am live from the third level of Ruby’s Cafe. I met the crew that helps broadcast fishing information last Friday to start the season off and we were met with a snow storm. It may have been snowing outside but the fishing information was positive. The famous skwala hatch should be starting soon on the Bitterroot River. Rock Creek has some good fly fishing right now and Spring Mack Days starts tomorrow on Flathead Lake. So the signs of spring are starting to appear in Western Montana but don’t put your snow shovel away just yet.

I will be heading to the Great Rockies Sport Show in Kalispell this weekend. The show takes place at the fairgrounds and Bill Reier Jr says this year’s show will feature exhibitors from around the world plus helpful fishing and cooking seminars all three days. “We love coming to the Flathead Valley and over the years the show has had great attendance”, said Reier. It is the last Great Rockies Show of 2011 in Montana. Stop by our Montana Outdoor Radio Show booth say hi and pick up your free 2011 hunting date card.

Over in Eastern Montana reports out of Fort Peck Reservoir are very good for northern pike fishing. “Pike fishing has been fairly good this winter but recently the pike fishing has been very good”, said Clint Thomas owner of Hell Creek Marina. The ice conditions are also very good with 20 inches in most places. “We expect ice to be good enough to fish on into the third week of this month”, said Thomas.

The 19th annual fundraiser will be held in Missoula this Saturday March 12th for the Montana Wild Sheep Foundation. The state banquet rotates from four different towns in Montana so this year it is Missoula’s turn to roll out the red carpet at the Hilton Garden Inn. The day’s events start at 11am-1pm with a $10 lunch seminar by Jack Atcheson Jr on sheep hunting worldwide. Then at 1:30-3pm there will be a panel discussion on the Future of Wild Sheep in Montana that is open and free to the public. The banquet kicks off at 5pm with a social hour. Tickets are $55 for the banquet which will include a live auction that will feature an Alaska Dall Sheep and Alaska wolf hunt. For tickets call Jim Weatherly 549-5697 or Jack Chambers 329-1700.