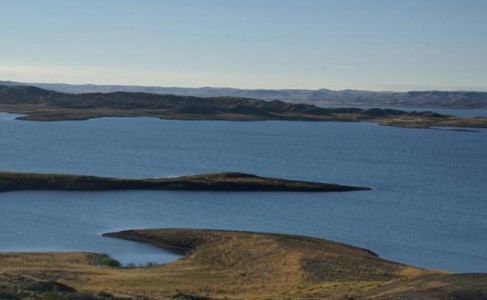 Last weekend I had the opportunity to travel across the state. My destination was Glasgow. I was invited to be the Master of Ceremony for the Glasgow Fort Peck Chapter of Walleyes Unlimited banquet. Saturday was the day that 45 vendors filled the Valley Event Center to display their goods and services from 9am-3pm. Then the vendors clear out and tables are set up to seat over 400 people for their annual banquet. It was another successful fund raiser for the local club.

The trip over to the northeastern part of Montana also enabled me to see first-hand the tail end of the challenging winter that the area just went through. “I have been here a long time and I can’t remember a tougher winter then this one”, said John Daggett Operations Project Manager for U.S. Army Corps of Engineers, who office is in the town of Fort Peck about 20 miles from Glasgow. As of last week Glasgow had topped the 100 inch mark for snow received. It officially stood at 105 inches of snow for the 2010-2011 winter seasons, a new record. Daggett has been working with a local flood control task force to help better prepare for potential flooding when all that snow starts to melt. Not surprisingly Fort Peck Reservoir’s water elevation is above last year. In fact the 134 mile long reservoir elevation came up nearly three feet during the month of March alone. The elevation currently is around 2240 with the April 1st Reservoir Basic Forecast showing Fort Peck will rise to 2243.9 feet in June, then only going down to 2234 by February 2012. “If we get above average run-off and precipitation this spring our Upper Basic Forecast calls for a rise to 2248.7 by June with releases going as high as 18,000 cubic feet per second with 3000 CFS being released through the spillway”, said Daggett. The spillway on Fort Peck has not been used since 1997.

The good news for anglers is more water in the reservoir over the past few years has meant better fishing. “We expect fishing to be better than last year,” added Heath Headley Fort Peck Fishery Biologist for Montana Fish Wildlife and Parks, “and last year was better than the year before”. The shore line on the reservoir that had been out of water for at least 8 years is now under-water. The plants that are submerged help the bait fish population. More bait fish means a better food supply for walleyes, northern pike and smallmouth bass to grow bigger.

Last summer around the Fourth of July I spent five days fishing Fort Peck. I was camped at Hell Creek State Park. The walleyes were in 3 to 8 feet of water. They were feeding on bait fish that were hiding in the submerged weeds. Three weeks later I made another trip over to Fort Peck and the walleyes had moved into deeper water, approximately 10 to 20 feet. I also picked up an occasional northern pike in the 8 to 10 pound range. To view my Fort Peck fishing experiences last year that I captured on two videos log onto www.montanaoutdoor.com