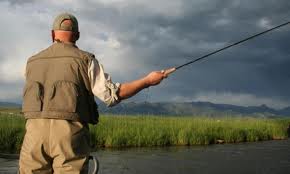 Fishing Events in Montana
By Hookemharry

Traveling east to fish Fort Peck Reservoir is starting to become a must annual event for me. In fact last July and August I made the 400 plus mile one way trip three times. The first two times were spent fishing for walleyes and the third trip I went after Chinook salmon. This year the first part of my trip involved being the Master of Ceremony for the 24th annual Montana Walleye Governors Cup. 83 teams competed in this years’ event. The winning team of Dallas Smith from Atkin Minnesota and Craig Hallock from Glasgow won it with 36.71 pounds.

It was an unexpected tough bite on the east end of Fort Peck where the tournament boundaries were located. A thunderstorm the first day and strong winds the second day with gust up to 30 miles per hour made the fishing challenging. The biggest fish caught in the tournament weighed 13.02 pounds. The tournament which is presented by the Glasgow Area Chamber of Commerce will be celebrating its 25th anniversary next year with additional cash and prizes. The first place team this year took home $6000.

I had a chance before the Gov Cup to fish for northern pike with Bill from Rock Creek Marina. Bill is an avid pike fisherman. “I normally don’t fish for walleyes but I might enter the Gov Cup next year because we always seem to pick up a few big walleyes while we fish for pike,” said Bill. While trolling for pike Bill uses leaded line with a about a 20-25 pound monofilament leader. He doesn’t use a steel leader which is a little unusual when fishing for big pike. Big pike are known to bite through monofilament so most anglers use a steel leader. “I troll about a six inch jointed rapala”, added Bill, “so it is pretty tough for the pike to get the whole lure in its mouth”. On the day that Bill and I went fishing I picked him up about 1pm and we headed out to a bay a short distance from Rock Creek Marina. We started to troll the shore line in 7 to 10 feet of water at about 1.7 to 2 miles per hour. The jointed rapala that we were using was orange on the back and gold on the sides and belly. It only took a few minutes for one of the rods to bend with a fish on. It so happens that the first fish that we caught was a 23 inch walleye. The next couple of hours we caught 7 pike with the largest weighing 10 pounds.
The Sunday after the Gov Cup I headed to meet my brother in law Tim Frost from Rapid City, Jim Johnson from Lincoln and Brandt Hammernick from Missoula at Hell Creek State Park. We planned on fishing for a few days out of Hell Creek which is 25 miles north of Jordan. The fishing was excellent. We caught a limit of walleyes everyday and they were all 16 to 21 inches in length. One afternoon Hamernick caught 40 pike just by casting a large swim bait to shore in Crooked Creek. Fishing on Fort Peck should be excellent well into August this year. To view video of my trip log onto www.montanaoutdoor.com