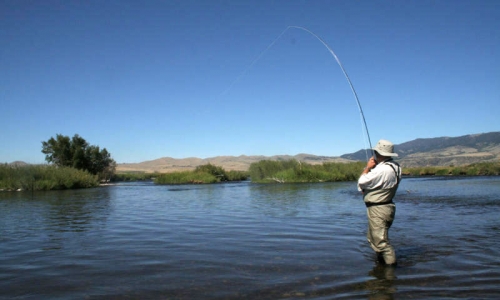 Whitefish Fishing at Flathead is Obsolete. Other Waters Picking Up
By Hookemharry

It has been another disappointing year for fishing whitefish on Flathead Lake. Many of the anglers were holding out hope that the bite might be delayed much like other fishing opportunities because of the tremendous spring-runoff that Montana experienced. We are now in the second half of August and as of yet there has not been much to report.

I asked Jim Vashro the Flathead Lake fish biologist for Montana Fish Wildlife and Parks what he knew and this was his response in an e-mail that he sent to me late last week. “The whitefish bite looks dead for the year, I’ve talked to guys in all the traditional spots as well as some out of the way areas. No one is seeing perch fry. Our best guess is that the extended runoff and cold water delayed zooplankton development and the perch starved to death. In addition there was also so much water moving through the lake some of the small perch in east Polson Bay probably flushed over the dam”. Vashro also said that the whitefish are around, they are just not concentrated. If you are like me and would like a whitefish fix then Vashro suggests heading for Echo Lake. “The lake is in a no wake so fishing is peaceful. Hit the main basin in 35-40 feet and you can get 6-8 whitefish in a good morning, same size as Flathead Lake,” he said.
Fishing is improving over on the reservoirs by Helena according to Troy Humphrey and Adam Strainer from Montana Fish Wildlife and Parks. On Canyon Ferry rainbow fishing is picking up while trolling cranks. The hot areas are Cemetery Island, Confederate and Goose Bay. The walleye fishing has been good too! Jigging has been good in 15 to 45 feet of water. On the south end try trolling cranks and worm harnesses in 12 to 25 feet of water.
Hauser Reservoir has seen slow fishing for trout. Walleye fishing is fair with most of the fish being caught in the Causeway on floating yellow jigs tipped with a worm.
On Holter Reservoir the trout fishing has also been fair with some rainbows being caught around Split Rock while trolling cowbells in the mornings. Shore fishing for rainbows is slow with a few being caught near the Gates of the Mountains. Walleyes are being caught consistently from Split Rock to the dam. A yellow of chartreuse jig fished in 5 to 15 feet of water has produced the best results.
Smallmouth bass fishing on the lower Flathead River should start to pick up with the water level and water flow going down. Don Beardsley from Missoula and I tried our luck last week and fishing was slow just off the reservation side of the river. We caught one small northern pike trolling an orange j-13 jointed rapala. We tried our luck at smallmouth bass and only produced a couple of bites. Brandt Hamernick from Missoula fished the lower Flathead River on the reservation side. Hamernick had a couple of days late last week where he caught some nice size bass and some smaller northern pike.