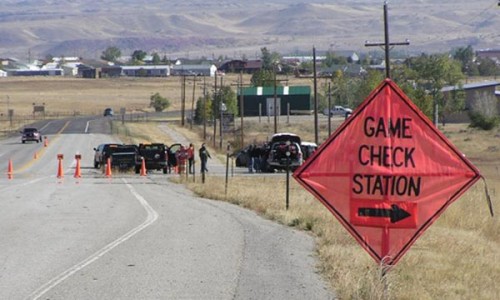 Region 5 – The number of hunters who stopped at south central Montana check stations over the weekend and the number of harvested animals picked up substantially from earlier dates.

Clear, cold, windless weather with snow on the ground in all corners of the region brought hunters to the field.

After last weekend’s historic lows at the three Montana Fish, Wildlife and Parks Region 5 check stations, the number of hunters and game checked Nov. 19 and 21 was welcomed by biologists.

FWP wildlife biologist Ashley Beyer said she checked 260 hunters on Saturday and Sunday compared to 125 during the same weekend in 2010. Because of the slow start, the number of hunter who have stopped at Lavina this season remains 12 percent below the long-term average. The success rate improved substantially over the weekend, to 29 percent, from the overall 22 percent so far this season.

Here are some statistics from the three south central Montana check stations:

For the first five weekends of the season, the mule deer harvest reported at Lavina is less than half of normal and the white-tailed deer harvest is 45 percent of the long-term average, Beyer said. The elk harvest, however is up 73 percent from historical averages.

With the deer rut in full swing, Paugh said, 73 percent of mule deer bucks and 87 percent of white-tailed deer bucks were more than 2.5 years old.

“It seems as though we are not seeing many yearling deer in the harvest,” Paugh said. Only 4 percent of the mule deer checked at Big Timber were yearlings while 24 percent of white-tailed deer were a year old.

With winter setting in on the Beartooth Face, FWP wildlife biologist Shawn Stewart said the number of hunters who stopped at Columbus was substantially smaller than last week, but still ahead of the same weekend in 2010.

For the 2011 season so far, Stewart said, the number of hunters is down 14 percent from historic averages while white-tailed deer harvest is 30 percent higher than average and mule deer harvest is 40 percent below normal.

The general deer and elk hunting seasons end at a half hour after sunset Sunday, Nov. 27.