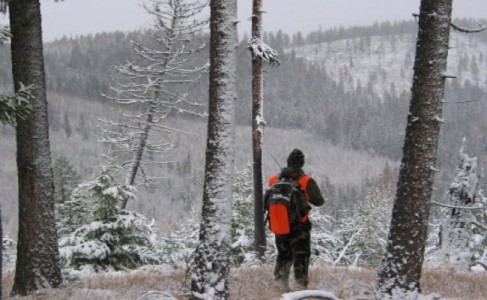 Montana’s wolf season is just a little over a month away from closing, with the exception of course of the Wolf Management Units that have already met their harvest quota and have been closed to hunting.

Over the past month I have had the opportunity to interview wolf hunters that have been successful and unsuccessful on the Montana Outdoor Radio Show. I thought it might be helpful to pass along some of the tips that I have heard from those interviews and by hunters that have made post on www.montanaoutdoor.com.

Wolves seem to move more in the mid-day hours from 10am-2pm. Wolves responded to distressed bird and animal calls but never responded to a call that sounded like a wolf howl.

Most wolves would come into range and keep anywhere from 100 to 600 yards away. The wolves always came from higher ground. They would come from the ridge tops mainly.

One hunter suggested that if you are hunting with another hunter to place one of you on top of the ridge and have the other hunter call from down below.

Another tip was don’t make the mistake of hunting wolves the same way you would a coyote. Wolves seem to be a lot smarter than coyotes. When the wolves approach a caller they would not stay for very long, if at all.

If you have a standing still shot at a wolf within range don’t hesitate for even one second, always take the shot. When hunting wolves just like hunting elk some basic hunting principles apply.

If they see you moving, smell you, or hear you they won’t come near you. One hunter found a cow elk the wolves had killed. He was also able to identify wolf beds in the snow where the wolves laid down by their kill and left blood in their beds. The wolves bedded down 80-100 yards from their kill to watch over it. They also had a wolf or two in the pack bed up high above the other wolves and the kill to have an advantage point.

If you are planning a wolf hunt then make sure you keep a couple of other things in mind. It is illegal to use a mechanical call but it is legal to use a decoy as long as it does not emit any scent and is not mechanical.

Make sure you check the current harvest against what the quota is in the Wolf Management Unit you are hunting.

Unlike during the Big Game Rifle Season, wolf hunters do not have to wear hunters orange from now until February 15, the close of the wolf season. And as with all hunting make sure you have permission to access private land and know the WMU boundary.

To report the harvest of a wolf within 12 hours of its kill, please call the Harvest Reporting line at 1-877-FWP-WILD. Check the date on your tag and make sure you have purchased the wolf tag five days before you harvest a wolf.