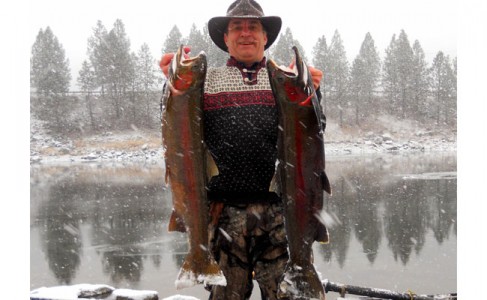 Catching Steelhead: By a Steelhead Junkie
By Kjel

I was recently asked, “How is it that you guys seem to catch Steelhead every time you go out?” That gave me pause to think back to the early 80’s, when my older brother Gerry first took me Steelhead fishing to the Orofino area. Within the first hour of daylight, my brother landed a beautiful male Red Sides of about 12 lbs and I was hooked. At that moment, I couldn’t remember a time I had a greater amount of sibling envy. I had to have one for myself. I dreamed of the adrenalin rush I would get from hooking into at least one of those mystic “b” run monsters. Before that obsession would be fulfilled, I would have to face two more trips over Lolo Pass followed by another 150 miles of the windiest, icy roads in Idaho. After landing my first fish, I finally experienced the little slice of heaven I expected. I figured I knew what I was doing, but I’ve been skunked many times throughout the years. I’ve been shown that ninety percent of the fishermen catch ten percent of the fish, usually by dumb luck. I knew I wanted to work towards being in the ten percentile catching ninety percent of the fish. Tom Steinbrenner with an Idaho Steelhead

The ten percenters catch most of the fish, because they know what they’re doing. They are passionate about learning as much as possible about what does and doesn’t work. Most of their knowledge comes through their own trial and error, but also through extensive research. Many good fishermen find information in magazines articles, books on Steelhead fishing, internet forums, talking to local guides and other devout Steelheaders. I always watched what they were doing and using and tried to mimic the ones who were catching fish.

My brother, who’s present fishing accomplishments will always far outweigh mine, first taught me to fish for Steelhead using the jig and slip bobber method.  Jigging requires a fairly deep hole of slow moving water where fish will hold. The use of a slip bobber lets you adjust your depth to run your hook through the hole at the level in the water column where you believe the fish are holding. This can be anywhere between 3 and 25 feet depending on how deep the hole is. Primarily, bobber fisherman use a scented jig or one tipped with a little roe or a shrimp tail. Although in the last few years, many are using trout beads in different colors, sizes and hues, of pinks, oranges, reds and yellows under their bobbers.

Fishermen need to ask themselves, “If you were a Steelhead, where would you be?” Most of the Clearwater River Steelhead leave the ocean in June and July making a leisurely trip up the Columbia and Snake rivers and will not actually start the spawning process until late March or April. Steelhead don’t run up river in freight train fashion like Spring Chinook do, so targeting Steelhead where they may rest and hang out for days or weeks can be quite productive. Tom Steinbrenner with another "Red Sides"

With bobber fishing you’re pretty much limited to fishing in just the deeper, slower holes; and that leaves a whole lot a river you’re not able to fish effectively. Drift fishing was the next Steelhead technique I learned from my brother. This method requires bouncing a corkie and yarn, or a roe offering near the bottom weighted with a piece of pencil lead or a “slinky”. As a fisherman feels for a bump or stall that is not the bottom, he or she sets the hook and hopes it is a steelhead. From there, I took up single handed fly fishing with large strike indicators (thing-a-ma-bobbers) a bunch of split shot and a pair of Steelhead flies (chuck & duck). This works just like it does in Western Montana Rivers and lakes nymph fishing for trout, except when fishing for Idaho Steelhead, I use a 7-8 wt, 9 to 10 foot fly rod a much larger fly reel with a quality carbon fiber drag system and a ton of 20lb fly line backing that gets used often. I found I couldn’t reach many of the holes the fish were holding in with my 9 foot fly rod and I saw why my brother and many other Steelhead fisherman were picking up an old Scottish fishing technique called the “SPEY”!

The spey rods we use are 7wt IM8 12 to 13ft, 4 piece switch rods that can be cast single handed or with double handed spey casts. We’ve found a few things that Steelhead consistently take when the presentation is offered at the right speed, in the right color, at the right depth, and at the right time of day. Over 80% of the Steelhead we’ve hooked have been in the first and last hour to hour and a half of daylight. Last year, my son and I bought a used 17ft Aluminum Drift boat and we use every technique we know or have heard of to try to put Steelhead in the fish box. We’ve been successful side drifting roe, bobber fishing seams, diving shrimp and roe, pulling plugs and swinging subsurface flies. So far this year most of the fish are still below Orofino due to lower than normal water conditions and most haven’t made that last push towards the Kooskia, Kamiah area. We’ve been fishing the section from about 10 miles above the Orofino Bridge down to Lenore, which is about 15 miles downriver from Orofino.

We’ve caught most of our fish this year on bobbers and “last week’s roe”, several on sand shrimp tails and a few slinging beads. A motor can be used on boats below Orofino, so side drifting long holes and motoring back up for another drift has paid off in large dividends, multiple times. I’d rather fish than row or run an outboard so when we see fish or think we “know” they’re in the hole we’ll anchor up and run the seams with our bobber rigs until we’ve hit it side to side, top to bottom, from high in the hole down through the tail-out. Then on to the next run.

As steelhead fisherman, we are purists in the simplest of forms. Whatever gets the Steelhead out of the water and cut into two beautiful, deep orange fillets works for us. Tom Steinbrenner demonstrating the "ready eat" method. No need for a fillet knife!